BY hellodrdavis on October 2, 2019 | Comments: one comment
Related : Soap Opera, Spoiler, Television, The Bold and the Beautiful 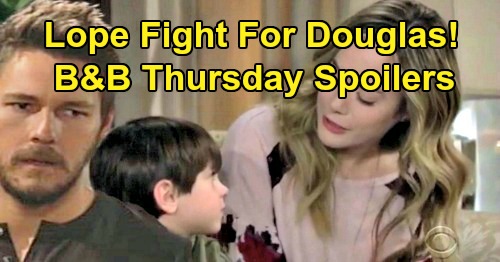 The Bold and the Beautiful spoilers for Thursday, October 3, tease that Thomas Forrester (Matthew Atkinson) will barrel forward with his plan to break up Ridge Forrester (Thorsten Kaye) and Brooke Forrester (Katherine Kelly Lang). He already managed to cause a huge blowup between “Bridge” when he made sure that Brooke learned about Ridge’s night with Shauna Fulton (Denise Richards). And it looks like that was only the beginning.

Now that Thomas suspects that Shauna may have a thing for Ridge (which, of course, she does), he’s going to enact part two of his plan to break up Ridge and Brooke. On Thursday’s B&B episode, he’ll seek out Shauna and have a big proposition for her. He’ll apparently come right out and ask her to help him break up “Bridge.”

Now, it should be interesting to see Shauna’s reaction to that proposal. On the one hand, she’d love to get involved with Ridge. She’s been gaga for him ever since she cuddled up next to him during their night together above Bikini Bar. She probably wouldn’t mind seeing if she could forge a relationship with him, even though he’s currently married. She doesn’t particularly care for Brooke, anyway.

But then again, Thomas isn’t her favorite person right now. She’s still peeved at how he treated her daughter Flo Fulton (Katrina Bowden) back when they were all keeping the secret about Beth Spencer (River Davidson and Madeline Valdez) being alive. Thomas threatened Flo’s life, and Shauna likely hasn’t forgotten that. But would she put that aside for the opportunity to get a little help with her quest for Ridge?

Meanwhile, on the new episode of B&B on Thursday, October 3, Hope Logan (Annika Noelle) will find herself worried about Douglas Forrester (Henry Joseph Samiri). As B&B viewers know, Douglas has been experiencing physical symptoms lately as a result of being around Thomas. He reported having a tummy ache after their last visit, during which Thomas berated his son for ratting him out and telling everyone that “Phoebe Forrester” was really Beth.

And now that Hope knows that Thomas is prone to sneaking in to seeing Douglas, Bold and the Beautiful spoilers say it looks like she’s going to want to take measures to keep him away from the little boy. On Thursday’s B&B episode, she’ll talk with Liam Spencer (Scott Clifton) about the need to protect Douglas from Thomas. They might want to increase security at the mansion and the cabin, but something tells us that Hope will have some other ideas in mind, too.

Could she be thinking about seeking temporary physical custody of Douglas? The way it stands right now, Thomas could come in at any time and take Douglas out of the mansion if he wanted to. Fortunately for everyone involved, that hasn’t happened, but Hope may want to ensure that this can’t legally happen. She might want to get Carter Walton (Lawrence Saint-Victor) or Justin Barber (Aaron D. Spears) involved and seek temporary custody of Douglas to keep him safe.

Of course, Douglas really enjoys being with Hope, Liam, and Beth, so he probably wouldn’t mind staying with them for the time being, but Thomas may be another story. He would likely fight the petition pretty hard, so Hope will probably want to hear from Liam that he’s on board for the fight. According to B&B spoilers, Liam will agree to help Hope keep Thomas as far away from Douglas as they can – we’ll see if that also involves legal action.