BY hellodrdavis on February 18, 2019 | Comments: one comment
Related : Soap Opera, Spoiler, Television, The Bold and the Beautiful 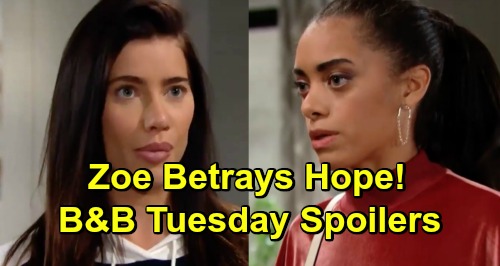 The Bold and the Beautiful spoilers for Tuesday, February 19, tease that Bill Spencer (Don Diamont) will have an amazing offer for his son Wyatt Spencer (Darin Brooks). Bill will offer Wyatt a lucrative position at Spencer Publications. He’ll want to welcome his son back into the company, under much better conditions than the last time that Wyatt was employed at Spencer.

Last time Wyatt was a part of Spencer, Bill basically made his life hell when he offered him the “keys to the kingdom” in exchange for his silence about how Bill tried to come between Steffy Forrester (Jacqueline MacInnes Wood) and Liam Spencer (Scott Clifton). Ultimately, Wyatt spilled the beans about Bill’s lies and deception, and Bill promptly fired him.

So, Wyatt will have a big decision to make. A part of him will want to go back to work with his dad, but he won’t want the past to repeat itself. Plus, he’s already got a great gig working at Forrester Creations now, and that would be a tough job to leave. And then there’s Sally Spectra (Courtney Hope) to think about.

Wyatt loves working with Sally at Forrester, and he’ll be reluctant to leave her there. But B&B spoilers say that Wyatt will get a bright idea soon enough. He’ll start thinking about ways that he can bring Sally with him to Spencer, and by the end of the week, he’ll have an intriguing counteroffer for his dad.

Flo and Reese will realize that Zoe’s liable to tell Steffy that Phoebe Forrester (Isabella de Armes and Redford Prindiville) is actually Hope Spencer (Annika Noelle) and Liam’s baby. They’ll go bonkers and try to figure out what they can do to stop her. But with Zoe at Steffy’s and on the verge of telling Steffy the truth, it doesn’t look like there’s much they’ll be able to do.

Bur fortunately for them, it doesn’t look like Zoe will go through with it and tell Steffy the horrible truth about Phoebe just yet. Perhaps Reese will call Zoe at an opportune moment and prevent her from telling Steffy, or perhaps Zoe will realize on her own that she’s unwilling to be the reason her father goes to prison and loses his medical license.