BY Heather Hughes on January 22, 2019 | Comments: one comment
Related : Soap Opera, Spoiler, Television, The Bold and the Beautiful 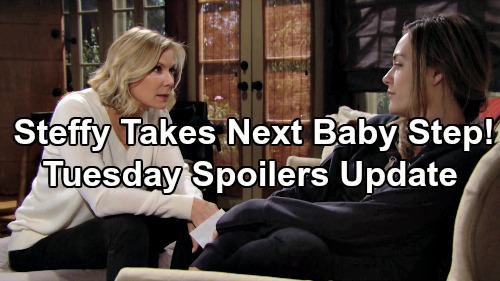 The Bold and the Beautiful (B&B) spoilers for Tuesday, January 22, tease that Dr. Reese Buckingham’s (Wayne Brady) alliance will be in jeopardy. He roped Florence aka “Flo” (Katrina Bowden) into his grand plan, but doubts will emerge soon enough. Flo will get some hints regarding Reese’s startling agenda. She’ll make a major discovery that sparks a confrontation and a fierce demand.

Flo will uncover some stunning evidence, so she’ll back Reese into a corner with it. Since Flo is in this just as deep as Reese is, she’ll want to find out what they’re dealing with. Flo will refuse to remain in the dark, so she’ll push Reese to start talking. If he doesn’t tell Flo exactly what she wants to know, there could be big trouble in this partnership.

The Bold and the Beautiful spoilers say Flo will ask where Reese got this baby. She’ll have questions about the child’s mother and why Reese is being so secretive. Flo will note that he doesn’t want Dr. Taylor Hayes (Hunter Tylo) and Steffy Forrester (Jacqueline MacInnes Wood) to know the real mom’s identity. Reese doesn’t want Steffy in the loop on his involvement either.

Flo will urge Reese to spill his secrets and explain his motives. Whether Reese tells the whole story or not, he’ll at least have to offer some crucial nuggets. Reese will definitely tell Flo about the thugs who are after his daughter. Zoe Buckingham’s (Kiara Barnes) life is at stake, so Reese will hope Flo’s willing to keep her promise.

Will Reese also admit that this baby belongs to Steffy’s ex-husband? Liam Spencer (Scott Clifton) and Hope Spencer (Annika Noelle) are struggling with horrible grief right now. They believe Beth Spencer is dead, but it looks like she was actually stolen. Reese has mentioned the gamble he took on Catalina Island, which suggests he risked everything to swap “Lope’s” little girl for a dead one.

Now Reese’s plot hinges on keeping Flo quiet and cooperative. Reese definitely needs Flo’s help to pull this off, so he’ll try to keep the situation under control. Elsewhere, B&B fans can expect more suffering for Hope. She’ll be unable to climb out of this soul-crushing despair pit.

Steffy, on the other hand, will contemplate a choice that could change her world for the better. It could certainly change Kelly Spencer’s (Zoe Pennington and Chloe Teperman) life as well. Steffy’s desperate to give Kelly a sister, so this adoption opportunity is just what she needs. Unfortunately, taking advantage of it could intensify Liam and Hope’s already severe pain.

It would also mean adding another baby to the house, so that’s another factor to consider. Steffy will have to weigh her options carefully before she moves forward. However, The Bold and the Beautiful spoilers say Steffy will indeed go for it. She’ll meet the baby by the end of the week, so it won’t be long until this adoption is official.

Steffy’s decision is sure to have some serious consequences in the months ahead. We’ll give you updates as other B&B news comes in. Stay tuned to the CBS soap and don’t forget to check CDL often for the latest Bold and the Beautiful spoilers, updates, and news.