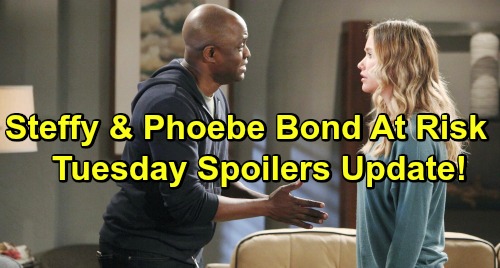 The Bold and the Beautiful (B&B) spoilers for Tuesday, March 12, tease that Dr. Reese Buckingham (Wayne Brady) will have his work cut out for him. Florence “Flo” Fulton (Katrina Bowden) is determined to confess the truth to Hope Spencer (Annika Noelle), so Reese is in panic mode. The fact that Zoe Buckingham’s (Kiara Barnes) backing Flo up isn’t helping.

On Tuesday, Reese will launch a speech about what’s at stake. He’ll remind Flo and Zoe that they could face legal drama right along with him. Flo pretended to be this baby’s birth mother, so she’s in this deep. Zoe also covered up their scam after she found out. Even if the cops let that slide, she’d inevitably lose her modeling gig for keeping Steffy Forrester (Jacqueline MacInnes Wood) in the dark.

Of course, Xander Avant (Adain Bradley) would also disapprove. He feels like Zoe has matured and turned from all her scheming, so he would be appalled by this huge secret. Reese may get Zoe back on his side, but what about Flo? She’s focused on Hope’s suffering, so Reese might point out that Steffy stands to suffer now.

Steffy and “Phoebe Forrester” (Isabelle de Armas and Redford Prindiville) have bonded as a mother-daughter duo. There’s no getting around that. Reese may warn that if Flo blabs, she’ll just be transferring the devastation to another mom. He could also argue that it wouldn’t be fair to little “Phoebe,” who’s already used to Steffy’s loving touch.

“Phoebe” is young enough that it wouldn’t really affect her to change mothers, but Reese could work that angle anyway. He’ll be throwing out every possible excuse for why spilling the beans is a bad idea. The Bold and the Beautiful spoilers say Reese will ultimately pull off his goal. He’ll convince both Flo and Zoe to keep quiet, but B&B fans know this secret’s bound to come out sooner or later.

Over with Wyatt Spencer (Darin Brooks) and Sally Spectra (Courtney Hope), they’ll concentrate on what’s next. Wyatt will reiterate that Flo isn’t a threat to his relationship with Sally. He’s completely devoted to his current love – and that goes for Sally’s career dreams, too.

Wyatt will bring up the fashion house and all their grand plans. He’ll promise Sally that the future is bright for them as a couple, so they’ll be ready for anything. That’s good since Wyatt’s feelings for Flo could grow stronger. Thomas Forrester’s (Matthew Atkinson) return may deliver an obstacle as well, so The Bold and the Beautiful spoilers say some romantic mayhem is headed “Wally’s” way.

It sounds like some fantastic scenes are coming up. We’ll give you updates as other B&B news emerges. Stay tuned to the CBS soap and don’t forget to check CDL often for the latest Bold and the Beautiful spoilers, update, and news.