BY hellodrdavis on March 11, 2019 | Comments: one comment
Related : Soap Opera, Spoiler, Television, The Bold and the Beautiful 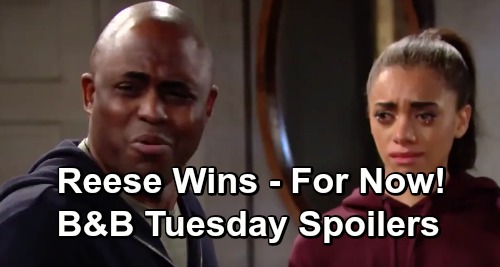 The Bold and the Beautiful spoilers for Tuesday, March 12, tease that Reese Buckingham will be desperate to reign in Zoe Buckingham (Kiara Barnes) and Florence “Flo” Fulton (Katrina Bowden). Zoe and Flo have decided to come clean to Hope Spencer (Annika Noelle) about Reese’s baby switch and adoption scam, and Reese has just arrived on the scene. He’s horrified that the two want to tell Hope the truth, and he needs to act fast.

Reese will do his best to convince Zoe and Flo not to reveal the baby switch. He’ll likely appeal to their desire to remain free women, as they’ll likely face criminal charges if they do reveal the truth. He’ll also probably point out that Zoe will surely lose her job at Forrester when it’s revealed that she knew about the scam but went along with it.

But will Zoe and Flo listen to Reese? Flo seemed pretty upset and determined to tell Hope the truth, so Reese may have to bring out the big guns and could resort to threats. For example, he might tell Flo that if he goes down, he’ll tell the cops that she was in on the scam from the start. Of course, that’s not true, but he could really make Flo’s life miserable if he lies and claims that she was in on it from the beginning.

Whatever the case, this secret is going to live for a while longer, so it seems that Reese will succeed in getting Zoe and Flo to continue keeping the secret for now. Perhaps he’ll try to buy some time and at least get them to not reveal the secret just yet. One thing’s for sure…Flo’s not going to be happy about it.

Meanwhile, on the new B&B episode on Tuesday March 12, Wyatt Spencer (Darin Brooks) and Sally Spectra (Courtney Hope) will enjoy each other’s company and spend the evening talking. They’ve been chatting about Flo’s re-emergence in Wyatt’s life, and Sally says that she’s ok with Flo being a part of their lives.

Sally and Wyatt really seem to have a solid relationship and a lot of trust between them. It’s encouraging that Sally isn’t threatened by Flo, but still Wyatt will reiterate his commitment to her on Tuesday’s episode. He’ll want Sally to know how much she means to him, and how much she can count on him, both relationship-wise and in their new business venture.

Of course, Wyatt and Sally are about to face another blast from the past when Sally’s ex, Thomas Forrester (Matthew Atkinson), comes back to Los Angeles. This may be more of a challenge for Wally than Flo presented to them, given that Sally and Thomas were fairly recently together. But we bet that Wally can overcome the presence of Thomas in their lives, too.