BY Heather Hughes on March 19, 2019 | Comments: one comment
Related : Soap Opera, Spoiler, Television, The Bold and the Beautiful 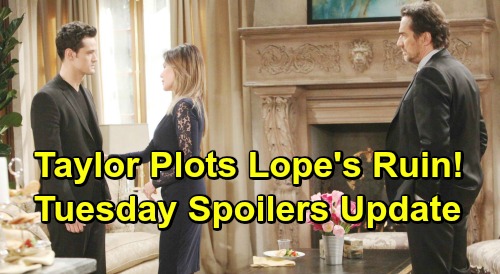 The Bold and the Beautiful (B&B) spoilers update for Tuesday, March 19, tease that the mood will remain somber for Caroline Spencer’s (Linsey Godfrey) loved ones. The Spencers, Logans and Forresters have already been sharing a few memories of Caroline, but they’ll naturally want to have a true memorial service as well. It’s the least they can do for grieving Thomas Forrester (Matthew Atkinson) and his son.

Douglas Forrester (Henry Joseph Samiri) is struggling with the news of Caroline’s passing. He even told Hope Spencer (Annika Noelle) he believed his mom would come back. Thankfully, Hope’s been there to talk the kid through it. Dr. Taylor Hayes (Hunter Tylo) overheard part of their kitchen chat, so the wheels may start turning on Tuesday. She’ll definitely pick up on Hope’s connection to Douglas.

Steffy Forrester (Jacqueline MacInnes Wood) doesn’t want to interfere in Hope and Liam Spencer’s (Scott Clifton) marriage, but Taylor just might go there. It seems inappropriate to play Cupid when Thomas just lost Caroline, but Taylor doesn’t have to be that blunt about it. The goal isn’t necessarily to pair Caroline with someone else. Taylor just needs to free Liam up for Steffy when she returns.

Taylor might encourage Thomas to let Hope spend more time with Douglas – and join in himself. She may think as Hope’s bond with the Forrester boys gets stronger, she’ll neglect Liam or make him feel like they’re growing apart. This could be a sneaky way to set up another round of “Steam” once Steffy gets home from Paris.

Regardless, Hope will find that being around Douglas’ warms her heart. Douglas will also enjoy hanging out with Hope in Tuesday’s B&B episode. The Bold and the Beautiful spoilers say they’ll have fun playing a card game together. When Thomas enters to see their smiles and hear their laughter, he’ll cheer up a bit, too.

Hope’s been stuck in mourning after losing Beth Spencer, so being useful to Douglas will have a healing effect. She felt so powerless throughout that ordeal, but she can make a different in Thomas and Douglas’ lives. By supporting Douglas and even his father, Hope can finally help herself.

The Bold and the Beautiful spoilers say this could be the start of Thomas and Hope’s romance, but they’ll have to move slowly. Caroline just died and Hope is married to Liam, so things are bound to be complicated! We’ll give you updates as other B&B details emerge. Stay tuned to the CBS soap and don’t forget to check CDL often for the latest Bold and the Beautiful spoilers, updates and news.