The Bold and the Beautiful Spoilers: Tuesday, May 21 – Hope Re-Evaluates Her Life After Caroline’s Letter – Thomas’ Forgery Works

BY hellodrdavis on May 20, 2019 | Comments: Leave Comments
Related : Soap Opera, Spoiler, Television, The Bold and the Beautiful 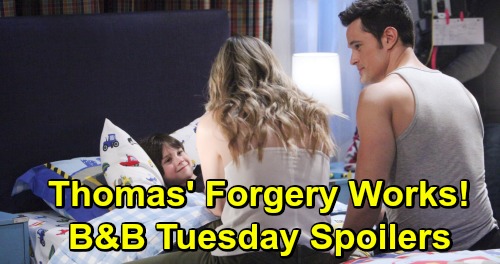 The Bold and the Beautiful spoilers for Tuesday, May 21, tease that Hope Spencer (Annika Noelle) will be feeling emotional. She’s just heard Thomas Forrester (Matthew Atkinson) read a letter allegedly from Caroline Spencer (Linsey Godfrey) in which Caroline talked about her wish for Douglas Forrester (Henry Joseph Samiri) to have a mother-figure in his life in her absence.

But as B&B viewers know, Thomas penned this letter himself, and is using Caroline’s “words” to manipulate Hope. Thomas knows that Hope has a hole in her heart after losing her daughter Beth Spencer, and that she feels a strong pull towards Douglas. He’s hoping that this letter will persuade Hope to abandon her marriage to Liam Spencer (Scott Clifton) and become a family unit with him and Douglas.

Well, it seems that Thomas’ manipulation will work wonders and move his plan right along. According to B&B spoilers, Hope will be deeply moved by the letter, and she’ll feel like she’s exactly the person who “Caroline” was talking about in her letter. This, in combination with the fact that Hope feels like she can never have another child of her own, is apparently going to push her right into Thomas’ arms.

The Bold and the Beautiful spoilers for later this week, May 20-24, indicate that Hope will end her marriage to Liam, so it looks like Thomas’ letter will indeed give Hope a new direction in life…and straight away from Liam. Look for Hope to come to the realization of her new direction on Tuesday’s episode, as she fully absorbs Caroline’s letter and what it means for her.

Meanwhile, on the new B&B episode on Tuesday, May 21, Shauna Fulton (Denise Richards) and Florence “Flo” Fulton (Katrina Bowden) will formally move into their new digs. The Bold and the Beautiful spoilers say that Eric Forrester (John McCook) and Quinn Forrester (Rena Sofer) will be on hand to welcome Shauna and Flo to their new home.

Of course, Shauna and Flo will be fresh from a tense conversation with Zoe Buckingham (Kiara Barnes), during which Zoe begged the Fulton ladies to go back to Las Vegas and put the baby swap secret behind them. Zoe’s worried that the deeper Flo gets into the Logan and the Forrester families, the more likely she’ll be to spill the secret that Beth is alive.

And Zoe has a point, because Flo is feeling more and more guilty as time goes by. But of course Flo does have a good reason to keep her mouth shut about the baby secret, too, and that’s Wyatt Spencer (Darin Brooks), who she’s embarking on a new relationship with. Flo will really mess things up with Wyatt if the truth ever comes out.

But for now, Flo and Shauna will enjoy their time moving into their luxurious new living arrangements. Quinn will probably fuss over them and help them get settled into their new lives as they try to forget about the baby secret and just enjoy themselves.