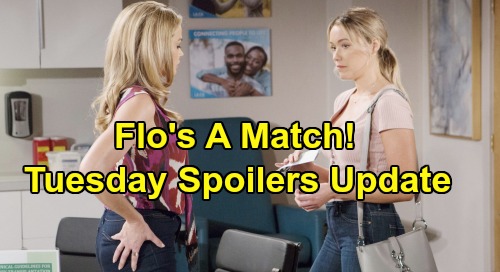 The Bold and the Beautiful (B&B) spoilers update for Tuesday, October 8, teases that Katie Logan (Heather Tom) will struggle with her grim circumstances. She’ll die without a kidney transplant, so things are growing dark in Katie’s world. As Katie’s options dwindle, she’ll be forced to face the facts. The possibility of not being around to raise Will Spencer (Finnegan George) will be devastating.

Katie loves being Will’s mom, and she knows how much her demise would crush her sweet boy. She also hates the idea of leaving Bill Spencer (Don Diamont) behind so soon after their reunion. The Bold and the Beautiful spoilers say Katie will confess her fears to Bill in Tuesday’s episode. She’ll open up about how much death terrifies her and get some comfort in return.

B&B fans can expect Bill to make an admission of his own. He’ll likely talk about his deep love for Katie and perhaps suggest it can work miracles. Bill won’t want to believe this is the end of the road for them, but Katie may make him promise to be there for Will anyway. She’ll want to know Will’s going to have everything he needs if she’s not around to care for him.

Of course, Bill would step up as an excellent single dad if he had to, but he’ll hold out hope for some last-minute savior. It turns out Florence “Flo” Fulton (Katrina Bowden) is the answer to Katie’s problems. Flo just has to get confirmation on that first.

Shauna Fulton (Denise Richards) urged Flo to get tested and see if she could be the one to save Katie. She’ll keep trying to convince her daughter on Tuesday, especially since this could help Flo make amends with the Logan family. The Bold and the Beautiful spoilers say Flo will ultimately agree, but she’ll insist it’s not because she wants to win the Logans over. She’ll simply hope to keep Katie alive.

Flo will indeed undergo testing, which will confirm she’s a match for Katie and can donate a kidney. The news will thrill Shauna, but Flo will drop a bomb on her mom later this week. She’ll stun Shauna when she insists she wants to remain anonymous!

It sounds like the excitement’s revving up, so don’t miss all the action. We’ll give you updates as other B&B details emerge. Stay tuned to the CBS soap and don’t forget to check CDL often for the latest Bold and the Beautiful spoilers, updates and news.