The Bold and the Beautiful Spoilers: Tuesday, September 17 – Ridge Faces Brooke After Hot Night With Shauna – Katie Fumes At Flo

BY hellodrdavis on September 16, 2019 | Comments: 3 comments
Related : Soap Opera, The Bold and the Beautiful 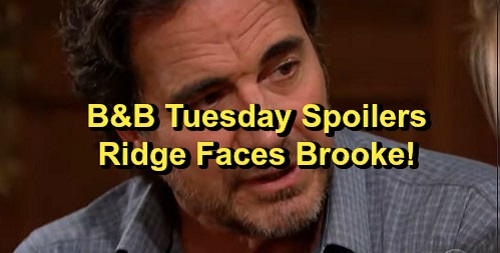 The Bold and the Beautiful spoilers for Tuesday, September 17, tease that Ridge Forrester (Thorsten Kaye) and Shauna Fulton (Denise Richards) will enter into a pact. As B&B viewers know, Shauna has just promised to never breathe a word about her night with Ridge to anyone. Of course, nothing untoward happened during that night – Ridge basically slept off all the whiskey he drank at Bikini Bar and Shauna stayed by his side.

But still, Ridge knows that if Brooke Forrester (Katherine Kelly Lang) finds out about his evening with Shauna, it could seriously intensify the rift between them. He’s got a lot to work out with Brooke as it is, and he really doesn’t need her knowing that he spent the night with another woman, no matter how innocent it was. Plus, there’s the fact that Brooke can’t stand Shauna, so it would be really bad if she were to know that Shauna played nursemaid to Ridge all night.

On Tuesday’s episode of B&B, look for Shauna and Ridge to make a formal agreement to keep their night together a secret between them. When it comes to filling in Brooke on where he was all night, Ridge will probably stick with the real story up to a point…that he drank too much at Bikini Bar and slept it off in the upstairs bedroom. He’ll probably just plan to omit the part about Shauna being there and accompanying him to the room.

At any rate, it looks like Ridge will soon head home and face the music with Brooke. Now that Brooke has received some sage advice from Eric Forrester (John McCook) about Ridge’s feeling toward Thomas Forrester (Matthew Atkinson), perhaps she’ll be in a better mindset to talk with Ridge. And now that Ridge has calmed down and dodged a major bullet with Shauna, perhaps he’ll be a bit more receptive to Brooke’s point of view.

Meanwhile, on the new episode of B&B on Tuesday, September 17, Flo Fulton (Katrina Bowden) will be the target of yet another person’s rage. Flo’s really been on the receiving end of a lot of people’s wrath lately. She had explosive jail visits from both Ridge and Steffy Forrester (Jacqueline MacInnes Wood), during which she was blasted for her actions in keeping the secret about Beth Spencer (River Davidson and Madeline Valdez).

Then Sally Spectra (Courtney Hope) let Flo have it after Flo made a big appeal to Wyatt Spencer (Darin Brooks) about forgiveness and being sorry for her actions. But now, it will be Katie Logan’s (Heather Tom) turn to lash out at Flo. Of course, B&B viewers know that Flo is newly released from jail, so she may run into Katie out and about. At any rate, it seems that Katie and Flo will wind up in the same air space, and Katie will want to have her say.

Katie is very close to her niece Hope Logan (Annika Noelle), and so she personally witnessed just how devastated both Hope and Liam Spencer (Scott Clifton) were when they were led by Reese Buckingham (Wayne Brady) to believe that Beth died during childbirth. Katie saw firsthand just how devastated Hope was by Beth’s “death,” and she knows that Flo could have put a swift end to Hope’s suffering had she just come forward with the truth.

On Tuesday’s episode, look for Katie to completely unleash on Flo with some serious Logan woman wrath. According to B&B spoilers, Katie will let Flo know in no uncertain terms that she’s unwelcome in the Logan family and never will be, and that she should get out of Los Angeles and away from the family. Of course, Flo will likely do her usual song and dance, saying that she knows saying sorry isn’t enough and that she’s going to work to regain the Logan family’s trust.

It certainly looks like it’s going to be a bad scene, and that Katie’s going to get very worked up. Of course, all this stress isn’t good for Katie, given her ongoing heart problems. B&B spoilers warn that tragedy will soon strike Katie and Bill Spencer (Don Diamont) when Katie ends up collapsing. Now, whether that happens during or as a result of her argument with Flo remains to be seen – B&B viewers will have to tune in to see how it all unfolds.