The Bold and the Beautiful Spoilers: Twisted Thomas’ Future – Can He Be Redeemed or Should B&B Just Make Him a Full-Blown Psycho?

BY Marcy Cohen on May 17, 2019 | Comments: one comment
Related : Soap Opera, Spoiler, Television, The Bold and the Beautiful 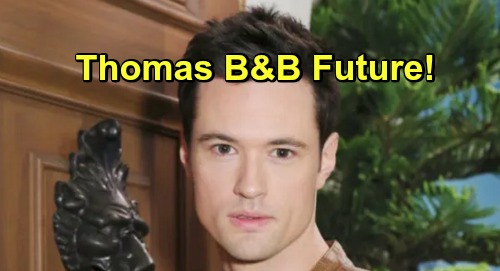 The Bold and the Beautiful (B&B) spoilers tease that Thomas Forrester (Matthew Atkinson) will continue to make sneaky moves and twist Hope Spencer’s (Annika Noelle) feelings. His behavior makes him seem like he’s going off the deep end, so we have to wonder what B&B’s doing here. Thomas has always been someone with boundary issues, but this is at a whole different level.

It looks like Thomas will ultimately get his wish when it comes to Hope. During the week of May 20-24, The Bold and the Beautiful spoilers say Hope and Liam Spencer (Scott Clifton) will make a painful decision regarding their marriage. Divorce is obviously just around the corner.

Hope may not jump into Thomas’ arms right away, but he’ll keep working his angle. He’s using Douglas Forrester (Henry Joseph Samiri) to pull Hope closer, so that trend will inevitably continue. Can we talk about how sickening that is for a minute? Thomas is literally calling her “Mommy Hope” to this poor child. Douglas’ actual mother just died not too long ago, so that’s completely disrespectful.

Even Thomas’ interest in Hope is bizarre. He certainly didn’t seem hung up on Hope when he was pursuing Caroline Spencer (Linsey Godfrey) or repeatedly reuniting with Sally Spectra (Courtney Hope). Thomas even spent time flirting with Sasha Thompson (Felisha Cooper) and going after Ivy Forrester (Ashleigh Brewer). Now Thomas suddenly has this Hope obsession that he just can’t shake.

B&B is making Thomas look downright insane. They can keep this up for a while, but they’ll eventually have to make a choice about this character’s long-term future. Should they try to redeem Thomas or turn him into more of a villain instead? We wouldn’t put it past them to make Thomas a full-blown psycho. They could always write in a brain tumor excuse if they wanted to undo it later.

The Bold and the Beautiful has proven that they’re willing to make story-dictated decisions about characters. Many fans were upset when they killed off Caroline so Thomas could come home and pursue Hope. It certainly seemed like a short-sighted decision. Caroline could’ve come back down the road, even in the form of a recast. Instead, the character was sacrificed for the sake of the storyline.

Is Thomas being sacrificed as well – just in a different way? Thomas was more of a player before. He could be sleazy at times, but he was charming, too. Now Thomas is just creepy and fixated on a romance that wasn’t even a huge part of his history. It should be interesting to see how far the show takes this version of Thomas.

Would you like for B&B to just commit and have Thomas become an unhinged nutjob? Would you rather see Thomas settle down and become a normal human being again? The Bold and the Beautiful spoilers say even more Thomas shockers are on the way, so stay tuned. We’ll give you updates as other B&B news comes in. Stick with the CBS soap and don’t forget to check CDL often for the latest Bold and the Beautiful spoilers, updates, and news.