BY hellodrdavis on April 9, 2019 | Comments: 2 comments
Related : Soap Opera, Spoiler, Television, The Bold and the Beautiful 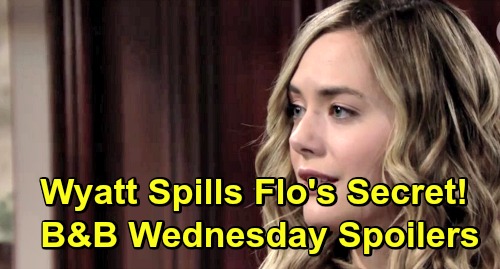 The Bold and the Beautiful spoilers for Wednesday, April 10, tease that Florence “Flo” Fulton (Katrina Bowden) will experience a crisis of conscience. Hope Spencer (Annika Noelle) has just summoned her to Forrester Creations for a meeting, and the two have spent time chatting and touring the establishment. Flo even met Donna Logan (Jennifer Gareis), who had kind words to say about Flo’s decision to give her baby up for adoption.

But Hope will want something more from Flo. Hope is searching for anything that will help her heal from the loss of her daughter, and she thinks that foraging a friendship with Flo would be a positive step forward for her. Hope feels that she and Flo have something important in common – they are both mothers who don’t have their children.

According to B&B spoilers, Hope will propose to Flo that the two of them become friends. She’ll be hoping that the two of them can open up to each other about their shared feelings of loss. Flo will be touched, but she’ll also be overcome with guilt about her role in Reese Buckingham’s (Wayne Brady) baby switch and adoption scam.

Flo knows that Hope could have the family of her dreams if she came clean about Phoebe Forrester (Isabella de Armas and Redford Prindiville) actually being Hope’s daughter. But it doesn’t look like Flo will spill the beans to Hope just yet. B&B spoilers say that viewers can expect this baby switch storyline to continue for a while.

Meanwhile, on the new episode of B&B on Wednesday, April 10, Wyatt Spencer (Darin Brooks) will reel from the news that he could be Flo’s half-brother. He certainly wasn’t expecting to learn that Bill Spencer (Don Diamont) and Shauna Fulton (Denise Richards) knew each other back in the day, and that there’s a chance that Bill is Flo’s father.

Wyatt will likely want some answers from Bill, Shauna, and Quinn Forrester (Rena Sofer), and the three of them will scramble to get Wyatt to understand that no one knew until just now that there’s a chance he and Flo could be brother and sister. B&B spoilers say that Wyatt will have trouble digesting the fact that he was romantically involved with someone who could turn out to be a relative.

B&B spoilers also indicate that Wyatt will do a little educating of his own. He’ll tell Bill, Shauna, and Quinn a secret about Flo, which will likely be the “fact” that Flo is Phoebe’s birth mother. This will certainly come as a shock to everyone, and especially to Shauna, who will have had no idea that her daughter recently gave birth, or could give birth!