BY Heather Hughes on April 17, 2019 | Comments: one comment
Related : Soap Opera, Spoiler, Television, The Bold and the Beautiful 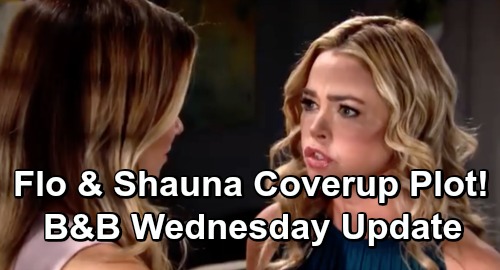 The Bold and the Beautiful (B&B) spoilers for Wednesday, April 17, tease that Hope Spencer (Annika Noelle) will have a crucial conversation with her husband. Liam Spencer (Scott Clifton) will get updates on the latest Florence “Flo” Fulton (Katrina Bowden) drama, which will leave a big decision for “Lope.” They’ll want to tackle this crisis together, but it still won’t be an easy task.

Flo was proven to be part of the Logan family through her biological father, Storm Logan (William deVry). Naturally, this is something Steffy Forrester (Jacqueline MacInnes Wood) needs to know about. She believes Flo is “Phoebe Forrester’s” (Isabella de Armas and Redford Prindiville) birth mom, so the news of her Logan connection will be a real shock.

Steffy thought she was adopting a kid from this random woman who needed to let go and move on. Instead, Flo is the cousin of Steffy’s “baby daddy’s” wife. Flo has every reason to stick around and be tied to her relatives forever, so that could definitely change the (fake) birth parent-adoptive parent dynamic.

Of course, there are Logan and Forrester connections all over the place – like Ridge Forrester’s (Thorsten Kaye) marriage to Brooke Forrester (Katherine Kelly Lang). These B&B families are closely intertwined, so Liam and Hope will know this is a tricky situation. They’ll wonder when the right time to tell Steffy is, but reaching an agreement should be tough.

The Bold and the Beautiful spoilers say Ridge will chime in on this at some point. He won’t think they should be in any hurry to blow up Steffy’s world. She’s minding her own business in Paris, so Ridge won’t see any need to cause trouble for her. He’ll think this is something that can be dealt with once Steffy returns to Los Angeles.

However, Hope and Liam won’t like the idea of leaving Steffy in the dark. They’ll form a plan to break this to her soon enough, so Liam’s upcoming trip to Paris should tie in with that. Meanwhile, Shauna Fulton (Denise Richards) will blow her top over Flo’s full confession. She’ll reel over the jam her daughter got herself stuck in, especially now that they know Flo’s a Logan.

Being in the family of the woman whose baby you stole obviously isn’t a great outcome! Flo will ultimately decide to come clean, but Shauna won’t want her to do that just yet. The Bold and the Beautiful spoilers say they’ll take stock of this whole nightmare and try to figure out what’s next.

B&B fans can expect some fantastic scenes, so stay tuned. We’ll keep you posted as other details emerge. Stick with the CBS soap and don’t forget to check CDL often for the latest Bold and the Beautiful spoilers, updates, and news.