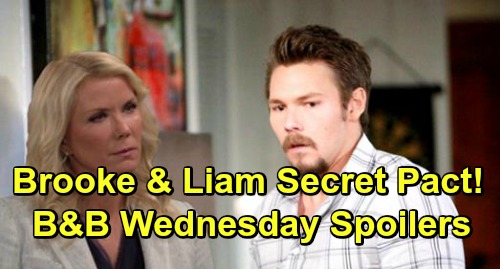 Despite Brooke’s insistence that this is a real threat, Liam just won’t buy it. He’ll argue that Hope has no interest in Thomas romantically. Liam will point out that Hope is just pitching in with Douglas Forrester (Joseph Henry Samiri), which Thomas appreciates as a single dad.

Caroline Spencer’s (Linsey Godfrey) demise was a great loss and so was Beth Spencer’s “death.” Liam can understand why Hope and Douglas are connecting, but he won’t think Thomas is really included in that. The Bold and the Beautiful spoilers say Liam will shut down Brooke’s concerns and contend that she should have faith in her daughter’s loyalty.

Brooke doesn’t doubt Hope’s love for her husband, but she also knows Taylor can be awfully sneaky. B&B spoilers state that Brooke will make a secret pact with Liam, which may involve keeping an eye on the situation. Brooke may urge Liam to watch out for Thomas as a romantic rival and bring it up if he sees any changes.

It seems Hope will walk in on their conversation, but Liam may brush it off as nothing. He’ll make it clear to both Brooke and Hope that he feels completely confident in his marriage. Since Thomas will grow closer to Hope later this week, maybe Liam shouldn’t be so sure there’s no cheating potential!

In the meantime, The Bold and the Beautiful spoilers say Sally Spectra (Courtney Hope) will deal with more Quinn Forrester (Rena Sofer) drama. Quinn obviously wants Florence “Flo” Fulton (Katrina Bowden) back with Wyatt Spencer (Darin Brooks), so she’ll make Sally’s life miserable on Wednesday. Sally and Quinn will be at odds over what Wyatt’s future should truly look like.