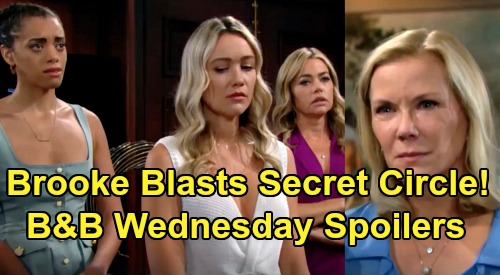 Brooke and Ridge Forrester (Thorsten Kaye) were absolutely floored by this revelation, and on Wednesday’s episode, they’re going to want some serious answers from Flo. Flo will recount the whole sordid story, starting with how things began when Reese Buckingham (Wayne Brady) stole Beth so he could sell her to pay off his astronomical gambling debt.

Of course, Brooke and Ridge are going to have a lot of questions, and they’ll be shocked to learn that Flo and Reese weren’t the only people involved in the secret-keeping. They’ll gradually learn how Zoe Buckingham (Kiara Barnes), and then Xander Avant (Adain Bradley), came to learn the secret, and how Emma Barber (Nia Sioux) was going to tell Hope Logan (Annika Noelle) the truth when she was tragically killed.

And of course, the story will round out with how Thomas Forrester (Matthew Atkinson) learned the secret, and then threatened everyone else who knew about Beth to stay quiet, all so he could further his devious agenda to get Hope for himself.

That will be a lot for Brooke and Ridge to take in, and Ridge just might be stunned into silence, especially when he is faced with what his son Thomas did, and as he starts to realize how all of this is going to affect his daughter Steffy Forrester (Jacqueline MacInnes Wood).

But Brooke is going to be absolutely furious as she realizes just how vast the conspiracy was to keep Beth from Hope. Brooke knows better than anyone just how devastated Hope has been over the past few months since losing Beth, and how her life has just crumbled around her.

According to B&B spoilers, Brooke will unleash her rage onto Flo and Shauna Fulton (Denise Richards), and soon Zoe will enter the scene. All three of them will get completely grilled by Brooke, and chances are, they won’t be able to get a word in edgewise. They might try to explain their actions, but it doesn’t look like that will get them very far.

Meanwhile, on the new episode of B&B on Wednesday, August 7, Hope will want some answers of her own. She’s just had a joyous reunion with Beth and Liam Spencer (Scott Clifton), and she’ll revel in that for a while, but soon she’ll want to know exactly how it came to be that they were led to believe that Beth died, and how Beth came to be in Steffy’s possession.

It looks like Liam will be the one to deliver the answers to Hope. The Bold and the Beautiful spoilers say that Hope will be shocked to learn everything started with Reese, and that he stole Beth in order to make a quick buck. Liam will recount the whole story about how Flo got involved and played the role of birth mother, then how others found out about the secret, and ultimately how Thomas kept Beth from her in order to marry her.

Hope will likely feel a range of emotions upon hearing this story – disbelief, rage, disappointment, and shock. And while she’ll eventually want those who were involved in the conspiracy to pay, there will be other things that she’ll need to focus on right now – like bonding with her daughter and arranging to take her home, which she’ll surely want to do right away.