The Bold and the Beautiful Spoilers: Wednesday, December 4 Recap – Thomas Promises Steffy That Liam Will Be Hers Again – Lope’s Nice Family Moments 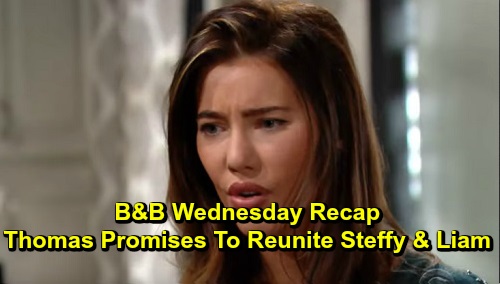 The Bold and the Beautiful spoilers recap for Wednesday, December 4, tease that it was the day before Thanksgiving, and Thomas Forrester (Matthew Atkinson) and Ridge Forrester (Thorsten Kaye) visited with Steffy Forrester (Jacqueline MacInnes Wood) and Kelly Spencer (Zoe Pennington) at Steffy’s house. Ridge and Steffy took the opportunity to point out that Douglas Forrester (Henry Joseph Samiri) should be there with him, but Thomas said that he was with Hope Logan (Annika Noelle) today.

The three then sparred about what Hope had done to Thomas, with Ridge pointing out that Hope thought she had killed him and kept it a secret. Steffy noted that this was “messed up” before talk turned to why Thomas had signed the custody papers. Thomas did his best to deflect the questions, pointing out that it was the day before Thanksgiving and that there were other things to focus on, like what everyone’s plans were.

Thomas was visibly happy when Ridge revealed that he wasn’t spending Thanksgiving with Brooke Forrester (Katherine Kelly Lang), and after Ridge left, Steffy needled Thomas about being happy that their dad’s marriage broke up. But Thomas quickly turned the conversation to his plan to eventually be with Hope, so that Steffy could have Liam Spencer (Scott Clifton). Steffy balked at this and pointed out that Hope doesn’t care about him.

But Thomas insisted that things would happen organically with Hope because he’s vowing to be a better person, and that the day would come when he’d have Hope and Liam would come home to Steffy. Steffy seemed completely skeptical and disgusted with Thomas over this.

Meanwhile, Hope, Liam, Douglas, and Beth Spencer (River Davidson and Madeline Valdez) spent some nice family time together in the cabin. Douglas wondered if he’d be able to see Hope tomorrow on Thanksgiving, and it was established that Douglas was going to be with Thomas at Eric Forrester’s (John McCook) place. Hope said “we’ll see” prompting a look from Liam.

Liam and Hope then talked privately, and Hope indicated her desire to spend time with Douglas on Thanksgiving, which Liam pointed out meant that they’d have to spend time with Thomas. Hope stated that Thomas would always be Douglas’ father and that she just wanted to concentrate on keeping an open mind and heart, and on putting aside differences.

They all then had some wonderful family moments together, complete with some flashbacks of when Hope and Liam finally got Beth back earlier this year. Hope praised Douglas for being the reason that they were all there together as a family, and Douglas seemed truly happy in the moment.

Finally, at the Forrester mansion, Shauna Fulton (Denise Richards) was daydreaming about her kisses with Ridge when Quinn Forrester (Rena Sofer) interrupted her. Quinn then invited Shauna and Flo Fulton (Katrina Bowden) to Thanksgiving dinner. Shauna readily accepted but stated that Flo was still taking it easy and recuperating from surgery.

Later, Ridge arrived to find Shauna in the living room. Shauna told him that Quinn had seen them kissing, but Ridge didn’t seem to mind. Shauna then stated that she felt really grateful for him, but that she didn’t want him to feel any pressure and that she didn’t have any expectations. She said that she just wanted to live in the moment, which Ridge praised her for, and the two ended up sharing a kiss.