BY hellodrdavis on January 29, 2019 | Comments: one comment
Related : Soap Opera, Spoiler, Television, The Bold and the Beautiful 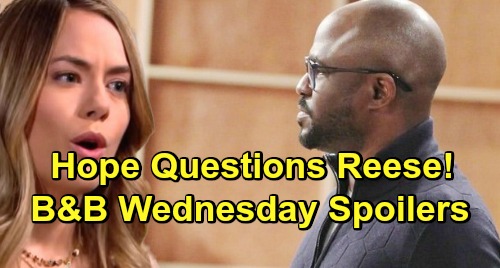 The Bold and the Beautiful spoilers for Wednesday, January 30, tease that Steffy Forrester’s (Jacqueline MacInnes Wood) adoption will be one step closer to becoming a reality, and she’ll be prepared to welcome little Phoebe Forrester (Rosalind Aune and Isabella de Armes) into the Forrester family. Steffy’s dream of providing a sister for Kelly Spencer (Chloe Teperman and Zoe Pennington) will finally be coming true.

On Wednesday’s episode, Steffy will start to spread the word of her new addition. She’ll start by telling Ridge Forrester (Thorsten Kaye) that he’s become a grandfather again. Ridge will be thrilled, and he’ll get emotional as he hears all about his new granddaughter. He’ll be particularly touched that Steffy chose Phoebe as her new daughter’s name.

In the coming days, Ridge will have some questions about the adoption, and especially about how it came about so quickly. It will start to seem too good to be true, but for now Ridge will just enjoy the news and prepare to meet the newest addition to the Forrester family.

Meanwhile, on the new B&B episode on Wednesday, January 30, Hope Spencer (Annika Noelle) will head to the OB-GYN for an appointment. She initially wasn’t going to keep her appointment, but she decided that it was best to see the doctor for a checkup since she recently gave birth.

While at her appointment, Hope will run into Reese Buckingham (Wayne Brady), who will likely be on the job. Reese recently divulged to Taylor Hayes (Hunter Tylo) that he was offered a transfer, but it seems that he’s still working in Los Angeles for the time being.

Reese probably won’t be happy to see Hope coming his way. Hope still has a lot of questions about how her healthy baby girl ended up stillborn. It just doesn’t make sense to Hope, so she’ll grill Reese for details.

She’ll be pretty demanding, but it looks like Reese will just cough up his placental abruption story once again, and Hope won’t be any closer to the truth about what actually went down at the Catalina clinic.