BY Olivia Marie on July 17, 2019 | Comments: one comment
Related : Soap Opera, Spoiler, Television, The Bold and the Beautiful 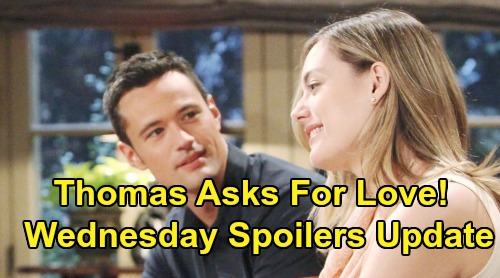 The Bold and the Beautiful (B&B) spoilers update for Wednesday, July 17 tease that Ridge Forrester (Thorsten Kaye) has had enough of his wife Brooke Logan’s (Katherine Kelly Lang) trashing his son and he decides to put his foot down. He is sick of hearing his son is a monster so he lets her know that she needs to tone down the Thomas bashing because he’s his child.

Ridge is fully aware of Thomas’ faults. They have a very complicated past because of Thomas’ manipulation with Caroline Spencer (Linsey Godfrey). Even so, Thomas is his child and it’s his job to protect him from his stepmother, who seems hellbent on dragging his name through the mud.

Let’s just say when Ridge confronts his wife about her treatment of Thomas that it doesn’t go well. Bold and the Beautiful spoilers say that she thinks that Ridge is coddling his son and that he manipulated and he is using her daughter.

The argument gets pretty intense, but Ridge decides to back peddle and agree to disagree. Brooke agrees to “try” to be kinder to Thomas. Something tells us that won’t last long.

Meanwhile, at the cliff house, Liam Spencer (Scott Clifton) is still on edge about Hope’s upcoming wedding. The Bold and the Beautiful spoilers say that he thinks it is a big mistake and he cannot find a way to convince Hope Logan (Annika Noelle) to end her engagement.

Steffy Forrester (Jacqueline MacInnes Wood) encourages him to move on and let Hope go but he cannot. B&B spoilers say that he thinks that Hope is being taken advantage of and he cannot figure out a way to rescue her. Liam knows Hope doesn’t really love Thomas as a man, her feelings are for little Douglas Forrester (Henry Joseph Samiri) – her need to be a mommy and his need for a mother are what is driving this sham wedding.

The Bold and the Beautiful spoilers say that Liam will recall his best moments with Hope. He will get clarity and he will come up with a plan to try to convince her to leave Thomas—once and for all. We all know that it won’t work. The only thing that might change her mind is to learn Beth is alive. And, that won’t come out for a few weeks yet.

Do you think Liam can convince Hope to put off her wedding? Don’t forget to come back to CDL later for more The Bold and the Beautiful (B&B) spoilers, news, and casting updates!