BY hellodrdavis on May 21, 2019 | Comments: one comment
Related : Soap Opera, Spoiler, Television, The Bold and the Beautiful 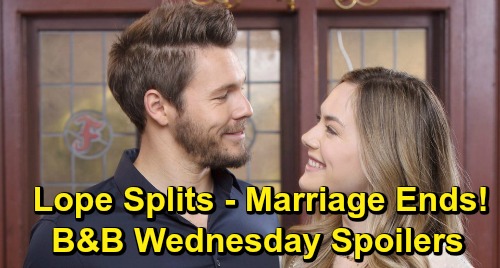 The Bold and the Beautiful spoilers for Wednesday, May 22, tease that Hope Spencer (Annika Noelle) and Liam Spencer (Scott Clifton) will have a serious conversation. Hope will have Caroline Spencer’s (Linsey Godfrey) letter swirling around her head, and Liam will have his conversation with Wyatt Spencer (Darin Brooks) fresh on his mind. And they’ll have a lot to talk about.

According to B&B spoilers, Hope and Liam’s conversation will take a heartbreaking turn as they each come to realize that their marriage isn’t going to make it. Hope’s just had a powerful experience with Douglas Forrester (Henry Joseph Samiri) during which she promised to always take care of him. She feels strongly pulled in Douglas’ direction now, and continuing on with her marriage to Liam will be difficult.

As for Liam, he’s just admitted to Wyatt that he would like to be there full-time for Kelly Spencer (Chloe Teperman and Zoe Pennington) and Phoebe Forrester (Isabella de Armas and Rosalind Aune), and that he misses Steffy Forester (Jacqueline MacInnes Wood). Of course, the question now is whether Liam will continue to resist when Hope once again insists that he go be a full-time dad to the girls.

B&B viewers should look for some intense, heartbreaking scenes on Wednesday’s episode, as Lope’s marriage crumbles around them. It seems that they’ll finally both be willing to accept that their marriage isn’t going to survive.

Meanwhile, on the new episode of B&B on Wednesday, May 22, Florence “Flo” Fulton (Katrina Bowden) will find herself in an uncomfortable position. She’ll be torn between her new life as a Logan and houseguest of Quinn Forrester (Rena Sofer) and Eric Forrester (John McCook), and the horrible secret she’s keeping about Hope and Liam’s daughter.

As B&B viewers know, Flo is under a tremendous amount of pressure from Zoe Buckingham (Kiara Barnes) and Shauna Fulton (Denise Richards) to keep the baby swap secret. A part of Flo wants to come clean and let Hope and Liam know that their daughter is alive, but the costs of spilling the secret have become too high.

Flo’s now a member of the Logan family, and if the truth ever comes out that she was a part of the scam that has kept Hope and Liam away from their daughter, she’ll be shunned by the family. So for the time being, she’ll keep her mouth shut, but the psychological cost to her will remain high, as she faces deep feelings of guilt.