BY Heather Hughes on May 8, 2019 | Comments: Leave Comments
Related : Soap Opera, Spoiler, Television, The Bold and the Beautiful 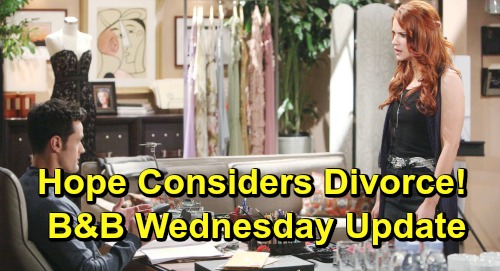 The Bold and the Beautiful (B&B) spoilers update for Wednesday, May 8, tease that Hope Spencer (Annika Noelle) will trust Florence “Flo” Fulton (Katrina Bowden) enough to open up. Hope feels a strong connection with Flo, so she’ll share the struggles she’s facing. Thanks to Thomas Forrester’s (Matthew Atkinson) proposal, Hope will be more concerned about ever about her own marriage.

After Hope admits Liam Spencer (Scott Clifton) is headed home, she’ll worry about tearing his family apart. Hope will hate being the reason Liam isn’t with Steffy Forrester (Jacqueline MacInnes Wood) and the girls full-time. She’ll note that Liam may not be “Phoebe Forrester’s” (Isabella de Armas and Rosalind Aune) bio dad, but she’ll still view him as “Phoebe’s” father.

Flo will back Hope up on that. She’ll promise it isn’t crazy to think of Kelly Spencer’s (Zoe Pennington and Chloe Teperman) sister as Liam’s daughter, too. Flo will state that Liam IS “Phoebe’s” father, but Hope obviously won’t pick up on the literal meaning there. She’ll just tell Flo what Thomas wants and wonder if maybe he’s right.

Despite Hope’s great love for Liam, she’ll admit part of her thinks he should heal on his own. Hope will point out that she can’t go through another failed pregnancy. Douglas needs a mom and just happened to drop right into her lap. She’ll consider the possibility that it’s fate and suggest she could heal with a new family while Liam heals with his.

Flo’s response to that will be absolutely not! She’ll panic at the thought of Liam and Hope being torn apart – presumably because the baby swap set all this in motion. “Lope” would be happy with Beth Spencer right now if it hadn’t been for Dr. Reese Buckingham’s (Wayne Brady) scheme with Flo.

B&B fans can expect Flo to take a stand. She’ll argue that this isn’t the way to honor Beth’s memory. Flo will declare that she won’t let Liam and Hope break up as tears roll down. It’s clear that Flo’s guilt is out of control, so she’d better rein her emotions in.

Other Bold and the Beautiful spoilers say Quinn Forrester (Rena Sofer) will be on cloud nine. She’ll be thrilled when Wyatt Spencer (Darin Brooks) updates her on his fight with Sally Spectra (Courtney Hope). Quinn will be appalled over Sally’s secret-keeping, but she’ll praise Flo as a paragon of truthfulness. This meddling mom will believe Sally’s decision to move out was the right call.

Quinn will think it’s time for Wyatt to accept who he’s meant to be with. She’ll try to nudge Wyatt in Flo’s direction, but he’ll be hesitant to jump right back in. Over with Thomas, he’ll get a visit from a fuming Sally. She’ll rip into Thomas for putting her in this impossible situation and destroying her relationship.

Thomas won’t be pleased that Sally broke her vow of silence. He’ll also contend that Wyatt and Sally can work through this, but she won’t be so sure. Sally will note that she already moved out, so things are awfully dire. She’ll add that Liam probably knows about Thomas’ plot by now, but Thomas won’t seem worried. It looks like he’s prepared for whatever Liam throws his way!