BY Heather Hughes on August 16, 2019 | Comments: one comment
Related : Soap Opera, Spoiler, Television, The Bold and the Beautiful 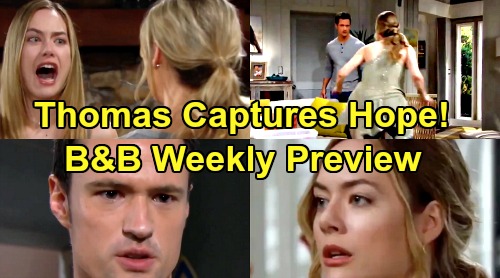 The Bold and the Beautiful (B&B) spoilers preview for the week of August 19-23 tease that some shockers are on the way. First, let’s talk about Florence “Flo” Fulton (Katrina Bowden). She just showed up to make a desperate plea for forgiveness, but Hope Forrester (Annika Noelle) has no interest in giving her a pass. Hope will make that crystal clear when she gives Flo the slap heard ‘round the world!

Flo will face quite a blow as Hope insists it’s what she deserves. Of course, Flo will face a far worse punishment after Ridge Forrester (Thorsten Kaye) demands her arrest. The Bold and the Beautiful spoilers say Shauna Fulton (Denise Richards) will freak as her daughter’s taken into custody, but Flo’s got it coming! This should be a satisfying week if you’ve been eager to Flo pay the price.

Later, Hope will get fierce with Thomas Forrester (Thorsten Kaye) as well. She’ll plan to get an annulment as soon as possible, so she’ll fill Thomas in over the phone. Liam Spencer (Scott Clifton) will look on as Hope angrily updates Thomas. She’ll insist their marriage is over and assures Liam she wants her current husband out of her life.

Hope will be ready to put Thomas behind her, but Liam will worry about the threat Thomas poses. Since Thomas is in hiding, they have no way of knowing where or when he’ll pop up. Brooke Forrester (Katherine Kelly Lang) will agree that Thomas is dangerous. She’ll side with Liam during an upcoming chat and offer a stern warning to Ridge. Brooke will think Ridge needs to accept that his son’s out of control.

Meanwhile, Thomas’ mental state will rapidly deteriorate. He’ll fume over Hope’s news about the annulment and insist she will indeed be his wife. B&B’s weekly preview promo shows an unhinged Thomas saying, “Till death do us part.” The Bold and the Beautiful is certainly dropping an ominous hint here.

Deadly danger will erupt later when Thomas stuns Hope at the cliff house. She’ll immediately realize she’s in deep trouble. Hope may worry she won’t make it out of this confrontation alive! Fortunately, Ridge and Brooke will figure out what Thomas’ plans are. They’ll put the puzzle together separately, so each one will race to find Hope and save her from Thomas’ clutches.