BY hellodrdavis on August 16, 2019 | Comments: one comment
Related : Soap Opera, Spoiler, Television, The Bold and the Beautiful 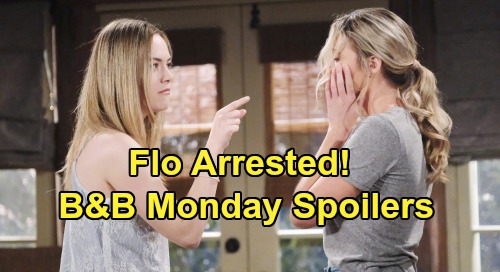 The Bold and the Beautiful spoilers for Monday, August 19, tease that Florence “Flo” Fulton (Katrina Bowden) will not get the forgiveness that she so desperately seeks. As B&B viewers know, Flo has just ambushed Hope Logan (Annika Noelle) in the cabin, and she’s begged Hope for forgiveness. But it certainly doesn’t look like Hope is going to be willing to forgive and forget, so don’t look for that conversation to end well for Flo.

According to B&B spoilers, Flo’s day will only get worse from there, as Ridge Forrester (Thorsten Kaye) and Brooke Forrester (Katherine Kelly Lang) see to it that Flo gets what she deserves. Ridge managed to get Reese Buckingham (Wayne Brady) arrested for his crimes in the UK, and he’s pending extradition back to the US where everyone’s going to make sure that he gets punished to the fullest extent of the law.

But now that Reese has been apprehended, Ridge and Brooke will turn their attention to punishing Flo for her actions. Sure, she didn’t orchestrate Beth Spencer’s (River Davidson and Madeline Valdez) kidnapping like Reese did, but she knowingly withheld information about a kidnapping and participated in an illegal adoption, which should carry some hefty legal penalties.

“Bridge” are itching to make Flo pay the price for her crimes, so it looks like they’ll call the cops on Flo, since Detective Alex Sanchez (Jeremy Ray Valdez) will be back on canvas for Monday’s episode. According to B&B spoilers, Shauna Fulton (Denise Richards) will be horrified when Brooke and Ridge see to it that Flo gets arrested. Bridge wants Flo to get what she deserves, and The Bold and the Beautiful spoilers say she’ll be handcuffed and arrested right in from of her mom.

At this point, asking for forgiveness is going to seem like child’s play to Flo, as she starts to realize the seriousness of the trouble she’s in. Of course, the downside of all of this for Ridge is that when Flo ultimately explains herself to Detective Sanchez, she’s most surely going to implicate Thomas Forrester (Matthew Atkinson) for a very serious crime…contributing to the death of Emma Barber (Nia Sioux).

Ongoing B&B spoilers say that Thomas’ involvement in Emma’s fatal car accident will soon become a serious police matter, and something that will cause tension between Brooke and Ridge later during the week of August 19.

Meanwhile, on the new episode of B&B on Monday, August 19, Wyatt Spencer (Darin Brooks) will find himself feeling conflicted. As B&B viewers know, he broke things off with Flo after he learned about her involvement in Beth’s kidnapping and illegal adoption to Steffy Forrester (Jacqueline MacInnes Wood). It was really a decision he didn’t have to think about, given his zero-tolerance policy on secrets in relationships.

But on Monday’s episode, look for Wyatt to start to think about his past with Flo. He truly loved Flo, back when he was a teenager and in the more recent past, and he may find himself reminiscing about some of their good times together. He also may find himself realizing just how much legal trouble Flo is soon going to be in, and he could feel some pangs of sympathy.

Still, Wyatt will know that once the police get involved with Flo, things are really out of his hands, and she’ll have to face the music and take her punishment, whatever that may be. Yet he might feel badly for her, since she wasn’t the one who actually started the whole baby swap mess and the web of lies to begin with.

We’ll see what happens with Wyatt and Flo going forward. Flo’s going to need some good legal representation, and it will be interesting to see if Wyatt starts feeling like he should step in to help. A part of him may want to do so, but we could easily see him conflicted about what to do next.