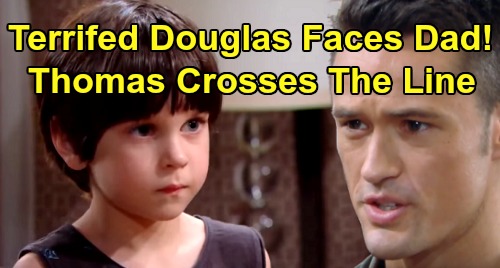 Hope will want an annulment from Thomas as soon as possible. She’ll also hope to undo Beth Spencer’s (River Davidson and Madeline Valdez) adoption quickly and make the name “Phoebe Forrester” a thing of the past. This adoption wasn’t legal since the baby was stolen, but all the necessary paperwork was still filed. Hope will rely on Justin to fix everything and make sure Beth’s a Spencer as she should be.

Of course, news travels fast on a soap! It won’t be long until Thomas hears about Hope’s decision to have their marriage annulled. Thomas will fly into a rage as he realizes his dreams are falling apart. He’ll hate the thought of Hope putting him in the rearview mirror and remarrying Liam Spencer (Scott Clifton) eventually.

That rage will be important as Thomas convinces Nanny Amelia (Nicola Posener) to bring Douglas Forrester (Henry Joseph Samiri) to him. Thomas will still be in hiding, but he’ll want to see his son and scold him for his disobedience. Poor Douglas will be terrified as Thomas booms over him. Thomas will fill the kid with fear and even prompt Douglas to put his hands up to protect himself.

It’s clear that Thomas isn’t happy about Douglas’ role in revealing the baby swap. Douglas will worry that his dad’s going to hit him. That probably won’t happen, but it definitely looks like Thomas will be tempted. The Bold and the Beautiful will use this to show Thomas struggling to contain his fury. He’ll likely manage to avoid physically hurting a scared little boy, but with adults? All bets are off!

B&B fans can expect Thomas to grow increasingly angry and irrational. If you thought Thomas was out of control before, you haven’t seen anything yet! The Bold and the Beautiful spoilers say some wild drama’s ahead, so stay tuned. We’ll give you updates as other B&B details emerge. Stick with the CBS soap and don’t forget to check CDL often for the latest Bold and the Beautiful spoilers, updates and news.