BY Heather Hughes on October 17, 2019 | Comments: one comment
Related : Soap Opera, Spoiler, Television, The Bold and the Beautiful 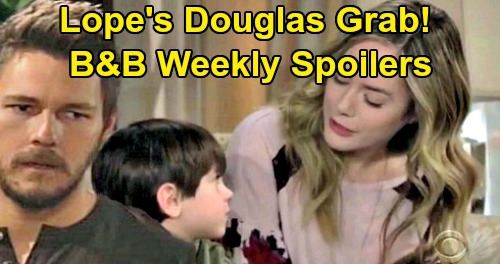 The Bold and the Beautiful (B&B) spoilers for the week of October 21-25 tease that we’ll see plenty of conflict and stunning moves. For starters, an argument between Hope Logan (Annika Noelle) and Steffy Forrester (Jacqueline MacInnes Wood) will rapidly escalate. It won’t be long until Steffy blurts out something that leaves Hope in shock.

Steffy will make a declaration that gives her the upper hand. She might contend that Liam Spencer (Scott Clifton) will never truly be over her or perhaps allude to something said behind Hope’s back. Whatever the case, Steffy will succeed in adding to Hope’s list of insecurities.

Nevertheless, Hope will ultimately shift gears and focus on Douglas Forrester (Henry Joseph Samiri) later. She’ll want to keep Douglas safe, so she’ll make some emotional pitches. First, Hope will push Liam to let Douglas live with them permanently. She’ll basically want Liam to be a father to the boy, so he’ll express some hesitation. Keeping Douglas for good is a big step – and Liam will know Thomas Forrester’s (Matthew Atkinson) going to cause trouble.

Thomas will indeed lash out once he gets updates on this plan, which Brooke Forrester (Katherine Kelly Lang) will be pulling the strings on somewhat. He’ll race over to Brooke’s place, where he’ll insist that no one’s taking his boy away from him. The Bold and the Beautiful spoilers say Hope will deliver a tearful plea and urge Thomas to do what’s best for Douglas. Naturally, they’ll disagree on what that is!

Over with Ridge Forrester (Thorsten Kaye), he’ll keep trying to help Steffy and Thomas make amends. Ridge will hope to nudge Steffy toward forgiveness in the week ahead. He’ll contend that Thomas is going to step up and be a dependable dad. Ridge will reassure Steffy and use Douglas in his argument to bring the whole family together.

Later, Ridge will be appalled by what Brooke and Hope have cooked up. He’ll be especially furious with Brooke for plotting without his knowledge. Ridge won’t think it’s right for Liam and Hope to raise Douglas, and he’ll be sure to say so. He won’t like that Hope and Brooke have been trying to force Thomas into this.

Meanwhile, Thomas will break down in tears as he bonds with Douglas. He’ll get down on the boy’s level and let him know he’s going to do better. Thomas will want to be the dad Douglas deserves. Of course, we’ve seen a similar scene before and it didn’t result in very many changes. Will Thomas truly turn things around? Time will tell, but he’ll definitely keep scheming against the Logan clan.

As for Ridge and Brooke’s marriage, it’ll be hanging by a thread. They’ll worry they may not be able to overcome their Thomas issues. The situation with Shauna Fulton (Denise Richards) isn’t helping, but it’ll be Thomas that serves as the main source of conflict. Brooke and Ridge will wonder if they should just throw in the towel.

The Bold and the Beautiful spoilers say Bill will track Wyatt down and warn him about his meddling mom. Wyatt will have to watch out for Quinn as she gets sneaky! Over with Zoe Buckingham (Kiara Barnes) will find out about Thomas new designs. She’ll be the inspiration behind his latest line, so he’ll have some interesting plans for her at Forrester Creations.

It sounds like the excitement’s about to rev up. We’ll keep you posted as other B&B news comes in. Stay tuned to the DOOL and don’t forget to check CDL often for the latest Bold and the Beautiful spoilers, updates and news.