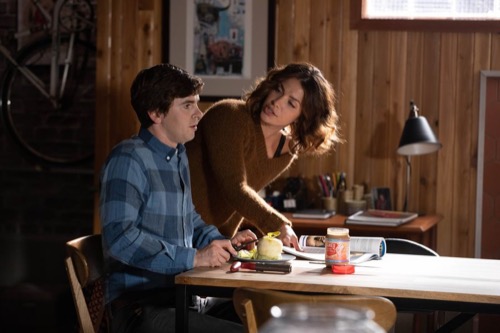 Tonight on NBC their new medical drama “The Good Doctor” airs with an all-new Monday, September 30, 2019, episode and we have your The Good Doctor recap below. On tonight’s The Good Doctor season 3 episode 2 Premiere called, “Debts” as per the ABC synopsis, “Dr. Marcus Andrews vows to help a good Samaritan who was injured while stopping a sexual assault, while Dr. Audrey Lim faces a difficult decision when a young patient’s parents suspect that Dr. Neil Melendez made a mistake.

Shaun was moping. His date with Carly hadn’t gone the way he wanted it too and now he’s depressed. He didn’t even like coming out of his room anymore. He only does when he has to eat and so, of course, Lea noticed. She also tried to draw him out of the shell. She played the music that was far too loud just so that Shaun would leave his room and complain about it, but Shaun stayed put. He was that depressed. His roommate later tried to talk to him about it and Shaun downplayed his emotions. He told her he was fine.

Like Lea didn’t know better. She could see that Shaun was hurting and she tried to tell him that it was okay the date was a bust for him. She said what mattered was that he liked Carly. She knew that and so did he and yet Shaun said he didn’t need Carly. He also tried to claim that he had everyone he needed. He has his friends and he thought that was enough. Lea tried to tell him that he needed more because everyone needed that special someone and that’s when he said. He said it wasn’t like everyone else.

Shaun believes that because he’s different he doesn’t deserve to have that special someone. He was also done with the conversation after that. He went back to ignoring Lea and went to work. Shaun like the other interns was looking forward to that first surgery. The first surgery that they get to take the lead on and naturally the competition for it was steep. Alex and Morgan discussed bribing the new Chief of Surgery. Alex told Morgan that he was going to get Lim a pillow and so she tried to outdo by getting Lim muffins.

Only Alex never got the pillow. He tricked Morgan into going big because he knew Lim would see it as bribery and that she would call Morgan out for it. Morgan didn’t realize what he did until she was getting in trouble. So, Alex’s plan worked, and he was one step closer to that solo surgery. They were still arguing about it as they heard about a complicated surgery. This surgery involved a good Samaritan who tried to stop a guy from groping a woman and was attacked for it. Josh suffered multiple fractures to his face.

It was barely going to be possible to save his jaw function. Dr. Andrews opened him up to see what he could do and it turns out not much. He initially thought the only way forward was to wire the guy’s mouth close. It would take away Josh’s ability to eat solids and he never would be able to talk again. All this because he stepped up for a stranger. Josh’s plight was unfair and even Andrews took a stand against the surgery that would deprive Josh of so much. The doctor wanted to find another way that could hopefully give Josh back his life.

Andrews, therefore, threw together an all-night late session. He pushed everyone into finding something that could help Josh and, despite ingoing into the early hours, they still walked away with nothing. They eventually had to bring the session to halt just so that they’d get enough sleep in. The only one that didn’t go home to sleep was Shaun. He stayed up all night researching alternatives and even received a visit from Carly. Carly came by because she felt bad that Shaun hadn’t enjoyed himself on the date.

Carly did question if she put too much pressure on him. She wanted his opinion about that and Shaun’s mind was elsewhere. He was thinking about the surgery. He also came up with the answer while he was with Carly. He ditched her when the idea came to mind and went to Dr. Andrews’s house looking for approval. It was late, but he wanted the doctor to know he found a solution and that it would be a risk. Shaun found a way to do the surgery and it could also potentially kill the patient. It really was up to Josh to decide if he wanted to risk it all for the chance to talk again.

No surprise, he proved willing. Josh was a hero because he was wasn’t afraid of the unknown and so he was meant for this surgery. He also was the first to ever get it. Dr. Andrews had to get permission from Lim and, before she gave him an answer, she wanted to know why this surgery. She asked him about his motives. She thought he was so set because he was looking for meaning after getting fired and Andrews refused to go there. He focused on the surgery alone thereby forcing Lim to do the same.

It didn’t matter what his motivation was. Andrews wanted to give Josh a chance at life and he was doing so with Claire and Shaun by his side. The other two doctors were with Melendez. Alex and Morgan were performing a second surgery on a baby after the first one didn’t seem to take. Everyone thought it was because Melendez made a mistake. Lim even thought the same and so she opened up the baby herself. She later saw that they had all been wrong about the baby. It wasn’t anything that Melendez did and his first surgery showed that there was an underlying problem.

Lim tried to fix what she did by bringing Melendez to perform the surgery with her though who knows what could have happened if the surgery hadn’t been successful. Neither of them had liked being in the position of her taking things away or him having or having to go out to dinner after she took something away from him. It was awkward for everyone. They said they would try to better in the future and only time will tell well either of them lived up to it.

In the meantime, Josh’s successful surgery had helped everyone on it. Dr. Andrews let go some of his bitterness of having been demoted, Shaun realized he wanted to take a second chance at dating Carly, and Claire won her first solo surgery.

Claire was now in the lead of becoming Chief Resident and Morgan found out that was Alex’s plan all along. He just didn’t want Morgan as his boss because they all knew she would be a nightmare.

And as for Josh, he got to meet the woman he helped and sparks were flying.