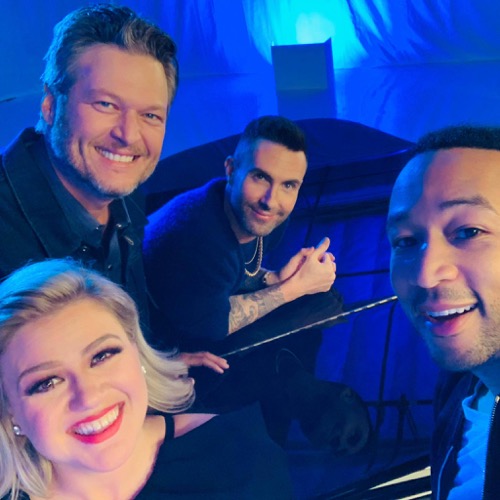 John Legend has gone down in history as the most blocked judge on “The Voice”.

His fellow judges have all thrown away their blocks to get him and so guess what? They’re now out of blocks. The judges were all free to bid on the vocalists they like and what’s more, there was no one to stop John from turning around for the first contestant. Both John and Kelly Clarkson had enjoyed listening to Jaco Maxell who did his own rendition of “Delicate”. He sort of stripped down the song until it was just him and his guitar and it had been very good, but the others hadn’t known what he was capable until he hit the high note right as the song was ending. Jacob Maxwell proved with that one note that he could be a rocker and so both Adam Levine and Blake Shelton missed out by playing cautiously. And unfortunately, Kelly still couldn’t get a guy to join her team because Jacob chose to join Team John.

The next contestant had been Karly Moreno. She grew up loving music and the only thing she came to loving as much was the skate park. She was a skater girl, was from Orange County, an if she chose a Gwen Stefani song no one would have blamed her. Karly definitely had that vibe and so her song selection had come out of nowhere. She chose “Starving” and put her own rendition on the song though she mostly stayed in one pocket with her voice and so she didn’t test out to wow the judges. She just sang with a song clear and without imperfection. It had been enough to impress one judge and, luckily for her, Adam was going to help push her out of that bubble. Her voice still needed guidance and she could find that on Team Adam.

The next contestant had been Luna Searles. She was a familiar face because she had tried out back in Season 2 and back then she hadn’t been ready for the show. Luna said she let her nerves get the better of her all those years ago because she didn’t know herself at the time and so some years, as well as experience, made her realize who she was now. She was a black rocker and tried to make a name for herself in a genre that didn’t really see a lot of black people. Therefore, this show was her way of being taken seriously and she thought she could wow the judges with her rendition of “Nutbush City Limits”. It had been as strong as she would have liked in the beginning and again she didn’t hit the note that would have impressed them until the end. And so she walked away from a free agent again.

Carter Lloyd Horne had been the next contestant. He was a good ole southern boy from Marietta, Georgia and he was just nineteen. He had a rough start because his family had been homeless for a while and so he had turned to music to help him. Carter was given an old guitar by his grandmother when he was a kid (or more of a kid) and he’s since become a country rocker. He chose the song “Drinkin’ Problem” despite the irony and it had been his last note that won over both Blake and Kelly. They had been surprised to turn around and see a young man because they thought that raspy voice belonged to someone much older. And so the judges pleaded their case to this kid because they wanted this young country star that could be molded but Carter chose Team Blake.

The next contestant had been Talon Cardon. He was a young kid himself at eighteen and he had worked until he bought himself a guitar, but surprisingly he didn’t choose to play it for his audition. He instead went with a song like “Say You Won’t Let Go” in honor of his father. His father had been badly injured on the job because of a cop and for a while, it had scared Talon. It made him realize that while he didn’t want to be a cop anymore, he still wanted to always pay his respects and so he chose his song because it was how he felt when he almost lost his dad. And while he had been good, it had taken the judges sometime before one of them eventually turned around and asked Talon to join Team John.

The next contestant had been Patrick McAloon. He was unique because for the first time in the show’s history there was a father and daughter trying out. They weren’t trying out together because they weren’t a duo, but they were going to be going up one after the other and the first one from their family to audition was Patrick. He chose the song “Runaway Train” by an Indie band and his raspy voice had been impressive. Three of the judges had the turn around for Patrick and they all told him how much they loved him while it had been Adam who also loved the band that had won over Patrick. Patrick had realized he needed a coach that understood where he wanted to go stylistically and there was no better place for a rocker than on Team Adam.

Patrick’s daughter Ruby McAloon went next. She was sixteen and was even writing her own songs because she grew up around music. She got to see her father play for years and it gave her the confidence to try out. Ruby chose the song “Back To You” and sadly none of the judges had turn around for her. She was still young and she needed to grow into her voice. She had sounded nervous and slightly pitchy. None of the judges had mentioned that when they talked to her, but they did tell her to see her father as an example. It had taken him a while before he was appreciated and so there was no shame now with her not joining a team. Ruby still got a hug from Adam and she could always try out next year.

The next contestant had been Alena D’Amico. She came from a big Italian family where she said she had to shout to be heard and it seems to have prepared her for one day auditioning for “The Voice” She audition with the song “In My Blood” and the fact she chose a song traditionally sung by a man had won her some brownie points with the judges. They were iffy about her and so they only came around towards the end. Both Kelly and Blake turned at the same time. They both wanted Alena and Kelly decided to go with the idea of all-female teams just because she couldn’t seem to get any guys to join her. And so Alena went with girl power by being the first of the night to join Team Kelly.

Kanard Thomas had been the next contestant. He had had it rough growing up and hadn’t wanted the same for his son. His son has only known his parents as the best of friends and that’s because they tried to give him the best possible. It was even why Kanard was auditioning. He was hoping to win and give his son a better life, but sadly none of the judges had turned around for him. Kanard has a great voice and so maybe it was the song he chose. He chose “Riding With the King” and while that hadn’t been enough for the judges on “The Voice” it was enough for the “Comeback Stage”. Bebe Rexha saw potential in Kanard and she could help make it his way back to “The Voice”. And so Kannard was Team Bebe.

The next contestant had been Dexter Roberts. He had gotten off pretty lucky. He had a condition that was making him tired all the time and unable to eat. So he went to a bunch of specialists for help. There had been tens of them that couldn’t recognize his symptoms and finally, he found the right doctor. The doctor that knew the difference between nothing being wrong and a tick bite. This one doctor saved his life and tonight he got to audition with the song “Like A Cowboy” because of it. The song was about getting back up again and its what he did. He blew the judges away and received a four-chair turn as a country musician. All the judges, of course, said that they could do great things with a guy like Dexter and it had all been moot because there was no way that he was ever going to pick someone that wasn’t Blake Shelton. Dexter joined Team Blake and that was that.

The final contestant of the night was Jej Vinson. His parents had immigrated to the states when he was young and it had been hard at first because they had started from the bottom. They lived hand to mouth and Jej had blamed himself because he knew that only came to the states to give him a better life and so Jej wanted to repay for their hardships. He wanted to become a singer rich enough to take care of his family and so he auditioned tonight with the song “Passion Fruit”. It had been a great song selection and he too received a rare all four chair turn but he wanted to be different and so he didn’t go with the guys like everybody thought he would. Jeje instead chose to join Team Kelly and she was so happy at getting a guy to join her team that she promised that they were going to win the whole season.