The Young and the Restless Spoilers: Adam and Chance’s Connection Revealed – Surprising Reasons Behind Strange Alliance

BY Marcy Cohen on June 25, 2019 | Comments: one comment
Related : Soap Opera, Spoiler, Television, The Young and the Restless 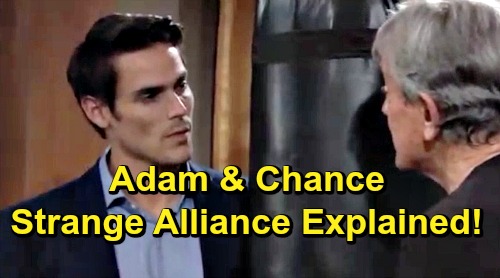 The Young and the Restless (Y&R) spoilers tease that a big mystery’s set to unravel in Genoa City. It’s left fans quite curious about where Adam Newman’s (Mark Grossman) storyline is headed next. Phyllis Summers (Michelle Stafford) went to Las Vegas and uncovered a secret. She now knows Adam has a connection to “Chance” Chancellor – and it’s a connection that he’d rather keep quiet.

In the episode airing June 25, Victor Newman (Eric Braeden) reveals that he knows about Adam and Chance as well. That makes sense considering Victor knows all! He’s got eyes and ears everywhere, especially as far as Adam’s concerned. Of course, Victor’s knowledge of the situation makes things even more interesting.

Phyllis is convinced that something shady’s going on, but is that really true? Chance was one of the good guys, so it’d be weird for Y&R to suddenly push him toward the dark side. Plus, wouldn’t Victor have already mentioned this to Nick if it could really hurt Adam? He’s “Team Nick” all the way in the custody fight, so Victor could’ve hinted at a blow during their previous chat.

It doesn’t sound like Adam’s link to Chance is truly nefarious. Perhaps this could even be something positive. After all, The Young and the Restless will need some sort of redemption for Adam down the road. He’s doing some awfully nasty things, so they’ll have some damage to undo. If Adam is protecting Chance in some way or repaying a favor, maybe that could be part of his redemption arc.

Adam may not want anyone to know about his softer side right now. He didn’t tell Phyllis that Kevin was the one who kidnapped her, and there may have been two reasons why. Adam was being loyal to someone who’s helping him and likely wanted Phyllis to think he was capable of anything.

The same thing could be happening with Chance. Adam’s silence may be partly due to loyalty and partly because it would show he’s not completely in line with this cutthroat persona. If Chance seemingly likes and supports Adam, there must be some good in his heart. Adam would rather be feared and powerful at the moment – at least until he gets everything he wants.

Whatever the case, The Young and the Restless spoilers say more will be revealed about Adam and Chance’s connection. There should be some intriguing reasons for their alliance, which could set up a Chance recast down the road. We’ll give you updates as other Y&R news comes in. Stay tuned to the CBS soap and don’t forget to check CDL often for the latest Young and the Restless spoilers, updates and news.