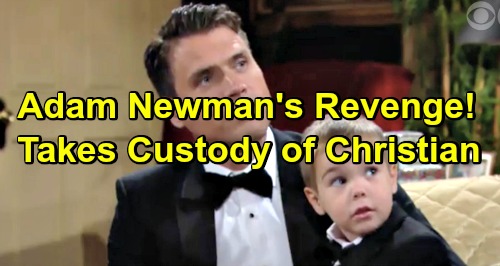 The Young and the Restless (Y&R) spoilers tease that Nick Newman (Joshua Morrow) could be the next Newman to face courtroom drama. His loved ones have been caught up in a murder trial thanks to some terrible choices. Nikki Newman (Melody Thomas Scott), Victoria Newman (Amelia Heinle) and Sharon Newman (Sharon Case) will all face lengthy prison sentences – at least until a twist gets them off the hook.

However, this ordeal has brought out the worst in Nick a time or two. In fact, we’ve been seeing Nick’s dark side ever since Victor Newman (Eric Braeden) went after custody of Christian Newman (Jude and Ozzy McGuigen) and Nick fought back. That led to Nick’s scheme to impersonate J.T. Hellstrom (Thad Luckinbill) as well as the “Phick” hookup that cost him his engagement to Sharon.

Y&R may take Nick back to the source of his troubles with another custody battle – only this time, Christian’s true father may have a shot at winning. The Young and the Restless spoilers say the hunt for Adam Newman has been underway, so the show could be gearing up for a May sweeps comeback. You can bet that some custody chaos will erupt once Adam’s back in the picture.

Some Y&R fans might argue that Nick deserves to be taken down a peg. If you’re looking for a hypocrite on soaps, look no further than Nick. He seems to think his own mistakes are fine, but judges anyone else who makes them.

Nick acts like Tessa Porter (Cait Fairbanks) is the scum of the earth for “scaring” his family with some letters, but he’s the one who was terrifying everyone in a mask of an abusive attempted murderer. That J.T. impersonation scam was a nightmare for Victoria, who thought her monster of an ex was out to get her again. Nikki and Sharon faced their fair share of terror over that, too.

It’s also somewhat frustrating that Nick is giving Sharon a pass for her confession, but he hates Phyllis’ guts for hers. Phyllis definitely sold the others out and deserves backlash for that, but Sharon got the ball rolling by coming clean to Rey Rosales (Jordi Vilasuso). Nick tends to pick and choose when he wants to be outraged.

The Young and the Restless spoilers say Nick’s sure to be more outraged than ever if Adam fights for his son. After everything that happened with Chelsea Newman (Melissa Claire Egan), Adam may want Nick to pay. Since Adam may not be able to track down Chelsea and Connor Newman (Gunner and Ryder Gadbois), that’d give him even more of a motive to fight for his remaining child on canvas.

Victor could get stuck in the middle of all this and find himself forced to take sides. If he teams up with Adam, that could mean disaster for Dark Horse. The Young and the Restless could be prepping for Nick’s downfall next! Regardless, there’s a good chance Nick will be the next Newman family member to cope with a courtroom crisis – along with his vengeful brother of course.

It sounds like Y&R could have some great stuff coming up over the next few months. We’ll give you updates as other news emerges. Stay tuned to the CBS soap and don’t forget to check CDL often for the latest Young and the Restless spoilers, updates, and news.