BY Heather Hughes on March 12, 2019 | Comments: one comment
Related : Soap Opera, Spoiler, Television, The Young and the Restless 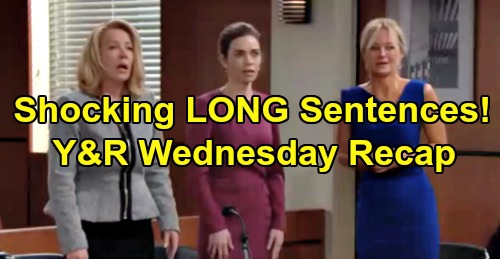 The Young and the Restless (Y&R) spoilers update and recap for Wednesday, March 13, tease that Nick Newman (Joshua Morrow) need to get to the courthouse, but he’ll make time to confront his daughter first. He’ll question Summer Newman’s (Hunter King) sudden engagement and suggest Kyle Abbott (Michael Mealor) isn’t ready to tie the knot. However, Summer will stand by their love and marriage plans.

Nick will at least think Summer should postpone the wedding. The timing isn’t appropriate since Nikki Newman (Melody Thomas Scott), Victoria Newman (Amelia Heinle) and Sharon Newman (Sharon Case) are about to learn their fates. Of course, Nick’s argument won’t win Summer over. She’ll insist on marrying Kyle tomorrow whether Nick likes it or not.

In the courtroom, everyone will arrive to support the ladies. Billy Abbott (Jason Thompson) won’t be happy about Phyllis Summers (Gina Tognoni) making an appearance. The Young and the Restless spoilers say the jury will deliver their decision for each defendant. Sharon, Victoria and Nikki will be found guilty of all charges against them.

The women’s sentencing will be in two hours, so they’ll be taken to a holding room in the meantime. Back in the courtroom, Abby Newman (Melissa Ordway) will gripe about the timing of Summer’s wedding. Summer will counter that they could use something uplifting. A frustrated Abby will urge Jack Abbott (Peter Bergman) to try his luck with Kyle, but she’ll eventually vow to deal with this herself.

Over with Nick and Billy, they’ll discuss the possibility that J.T. Hellstrom (Thad Luckinbill) is still alive. Nick will point out that the stables burned down and the ranch was bugged. Someone was targeting the Newmans, so Nick will think J.T. could be the answer. He’ll suggest J.T. could be right there in Genoa City. Billy will decide he’s in on the plan to track J.T. down and help the ladies.

Later, it’ll be sentencing time. Victoria, Sharon and Nikki’s loved ones will plead for leniency, but the judge will stick to the facts of the case. She’ll consider their actions regarding J.T.’s death cruel, so harsh sentences will come down – especially for Nikki and Victoria. Y&R spoilers say Nikki will get 30 years, Victoria will get 10 years and Sharon will get three years.

At Crimson Lights, Abby will go after Summer again. She’ll insist that Summer needs to cancel the wedding for Lola Rosales’ (Sasha Calle) sake. Abby will decide to come right out and ask Summer if she’s the anonymous donor. Summer will assure Abby that she’s not interested in Lola’s medical woes. She’ll refuse to give up on having the wedding of her dreams tomorrow.

At Jabot, Kerry Johnson (Alice Hunter) will reassure a guilt-ridden Phyllis. She won’t think it would’ve helped the others if Phyllis had gone down, too. Talk will turn to scoring an advantage at work. Phyllis will think Ashley Abbott’s (Eileen Davidson) company, My Beauty, is their main competitor right now. She’ll let Kerry know she may have a way to neutralize Ashley.

Afterward, Kerry will call her boss and mention hitting the mother lode. The Young and the Restless spoilers say Kerry’s scheme will bring some twists and turns, so stay tuned. We’ll give you updates as other Y&R news comes in. Stick with the CBS soap an don’t forget to check CDL often for the latest Young and the Restless spoilers, updates, and news.