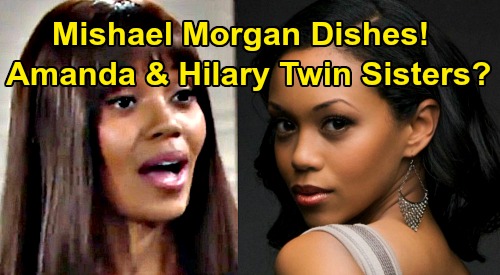 The Young and the Restless (Y&R) spoilers tease that the mystery of Amanda Sinclair (Mishael Morgan) will continue to unravel. At this point, not much is known much about Amanda and her background. Y&R’s been focusing more on the mystery surrounding Katherine Chancellor’s (Jeanne Cooper) will instead, but Amanda’s layers will peel back eventually.

The big question on everyone’s mind is: Why does Amanda look EXACTLY like Hilary Hamilton (Mishael Morgan)? After Devon Hamilton (Bryton James) flipped out over Amanda’s appearance, she admitted she looked up some old GC Buzz clips. Amanda suggested she could see a bit of a resemblance, but she was clearly downplaying it – perhaps because she was secretly just as freaked out!

In reality, Amanda has to be wondering why she looks identical to Hilary. Could Amanda be Hilary’s long-lost twin? In a recent interview with Michael Fairman, Mishael Morgan dished on that possibility. “I’m kind of playing that as part of the reason why I want to stay in town because Amanda is intrigued by this other person who looks like her,” Morgan said. “This could possibly be family. I think it adds an extra layer as to why she wants to stay on Genoa City.”

Morgan suggested Amanda may want to get to the bottom of this personal mystery. It’s one thing to have someone who looks a little like you. It’s quite another to have a dead ringer! Amanda’s surely thinking there must be more to the story here, so it’ll be interesting to see where this hot plot heads next.

There was also some exciting love triangle talk. Morgan could certainly see attraction happening between Devon and Amanda at some point. She also noted that it’d be fun to play some catfights with Elena Dawson (Brytni Sarpy). Even so, Morgan’s more interested in a different direction romantically. She wants to see Amanda go on a journey of her own, so perhaps another hunk like Nate Hastings (Sean Dominic) is best – at least for a while.

“I even feel that if she just ends up with Devon, it would be kind of weird,” Morgan admitted. Falling for your dead wife’s lookalike or even twin sister definitely fits in that “weird” category! Whatever the case, it’s good that The Young and the Restless is moving Amanda out of the will drama. That’ll hopefully give fans a chance to get to know the real Amanda and uncover a few secrets along the way.