The Young and the Restless Spoilers: Best and Worst of 2019, Y&R Year in Review – What Was Hot and NOT in Genoa City 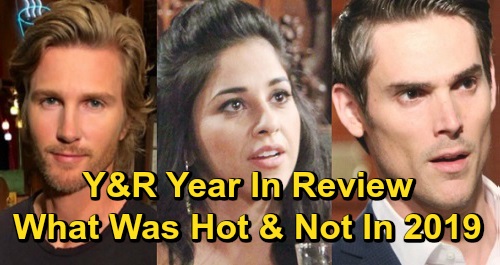 The Young and the Restless (Y&R) spoilers reveal that the year is winding down, which means it’s time to do some reflecting. This is the perfect opportunity to mull over the highs and lows in Genoa City. There have been some great moments along with some not-so-great ones, so let’s look at the best and worst of 2019.

For starters, the early part of the year brought the conclusion of the J.T. Hellstrom (Thad Luckinbill) storyline. The cover-up crew was arrested, which led to plenty of courtroom chaos. There were gripping performances all around, so that was certainly a high point. J.T.’s last showdown with Victoria Newman (Amelia Heinle), Nikki Newman (Melody Thomas Scott) and Sharon Newman (Sharon Case) was exciting as well.

Even so, the whole “brain tumor made me do it” thing was a bit of a copout. The ending was rushed and took away some of the impact of the abuse story that came before it. On the bright side, J.T. fans were likely pleased to see most of the damage to his character undone.

There was also Mia Rosales’ (Noemi Gonzalez) attack on Lola Rosales – now Lola Abbott (Sasha Calle). It was a cool twist for Mia to go after Lola thinking she was Abby Newman (Melissa Ordway), and Lola’s fall into the Abbott pool was unexpected, too. Since Y&R doesn’t do a lot of life-and-death shockers, we’ll put Lola’s pool fall in the plus category.

Unfortunately, Lola and Kyle Abbott’s (Michael Mealor) romance was overhyped after that. Y&R blew their early chance at a Lola, Kyle and Summer Newman (Hunter King) triangle – although Kyle is growing closer to Summer now. It didn’t make sense for Kyle and Lola to rush into marriage after his divorce from Summer. What was the hurry?

The Young and the Restless also focused too much on the trivial side of “Kola’s” relationship. When you think of soap operas, you don’t usually think of painting accent walls, building bookcases and going house-hunting. We really didn’t need to see Kyle making home repairs or Lola shooting cooking videos either. This just isn’t the kind of “drama” most fans wanted – as evidenced by the ratings.

Nevertheless, Kyle and Lola’s wedding was absolutely gorgeous. The Young and the Restless went all out for it, so they get credit for pulling off a beautiful ceremony. There wasn’t much to derail the nuptials other than a minor hiccup or two at the reception, but it was still a good time.

Lola’s bouquet toss was a hilarious highlight. The single ladies played hot potato before the bouquet landed in Mariah Copeland’s (Camryn Grimes) hands, which prompted her shrug and a kiss from Tessa Porter (Cait Fairbanks). It’s been wonderful to see Mariah and Tessa’s love story continue, but taking Cait Fairbanks off contract was a bad call.

Tessa’s reduced airtime means there’s no balance in the younger set now, and Mariah spends her days meddling in other stories instead of having one of her own. It’s a shame to waste talent like that, especially when nothing much has happened with Kyle, Lola, Summer and Theo Vanderway (Tyler Johnson). There’s no reason we couldn’t have had a “Teriah” story to liven things up and provide variety.

That brings us to another problem that’s plagued Y&R in 2019: dropped storylines. There was clearly something scrapped between Jack Abbott (Peter Bergman) and Lauren Baldwin (Tracey E. Bregman). Ana Hamilton (Loren Lott) was handling Tessa’s music career and gearing up for a story with Theo, but she was abruptly written out. Cane Ashby’s (Daniel Goddard) pairing with Traci Abbott (Beth Maitland) was nixed. Theo’s battle with Mariah was cut completely. Nothing ever came of the “big” New York secret.

It would be nice to see a little more follow-through from The Young and the Restless writers in the future. As for the much-buzzed-about Phyllis Summers (Michelle Stafford) swap of 2019, some of us still have mixed feelings about that. Y&R did Gina Tognoni dirty, but Stafford’s Phyllis is…well, classic Phyllis. She just needs an actual story and a romance, which they could be building to with Nick Newman (Joshua Morrow).

Shifting gears, the Grand Phoenix opening deserves the award for best event. Zoe Hardisty (Anna Grace Barlow) drugged the signature drinks, which led to some pretty comical behavior from the guests. It was definitely a memorable episode and one of this year’s true bright spots.

Y&R also didn’t shy away from the negative effects of Molly since Sharon and Devon Hamilton (Bryton James) suffered in the aftermath. The whole event was handled well and even gave us that lovely new hotel set. Society has also been a terrific addition this year, although some fans still miss the GCAC.

Of course, we have to talk about Adam Newman’s (Mark Grossman) homecoming. Things started off on a positive note when Sharon convinced an amnesiac Adam to return to Genoa City. Once Adam got his memories back, he reverted to his dark tendencies and went too far in many viewers’ eyes.

Victor Newman’s (Eric Braeden) fake death also fell flat since Adam simply left town and eventually came home. There were no real consequences, but Adam at least settled down. Chelsea Lawson (Melissa Claire Egan) overload has also been an issue, and her relationship with Nick has never really worked.

The hostage situation at the Grand Phoenix provided some fun excitement, but “Chance” Chancellor’s (Donny Boaz) return arguably wasn’t needed since so many other characters are being neglected. Theo being Dina Mergeron’s (Marla Adams) long-lost grandson seemed like a failed attempt at instant redemption, but it was a delight to see more of Traci this year.

Revisiting Katherine Chancellor’s (Jeanne Cooper) will was a baffling decision, particularly because shrewd businessman Devon was naïve enough hand over his fortune to Cane. This had Colin Atkinson (Tristan Rogers) written all over it from the get-go, so it was disappointing to see Devon dumbed down for this story.

However, the talented Brytni Sarpy (Elena Dawson) joined the cast in 2019 and has been a solid love interest for Devon. Grossman has made the role of Adam his own. Amanda Sinclair (Mishael Morgan) hasn’t quite been everything most of us hoped for, but things could be looking up now that we’re finally learning more about her. Maybe Y&R can build on that momentum and showcase more of Morgan’s talent in the coming weeks.