BY Olivia Marie on July 13, 2019 | Comments: one comment
Related : Soap Opera, Spoiler, Television, The Young and the Restless 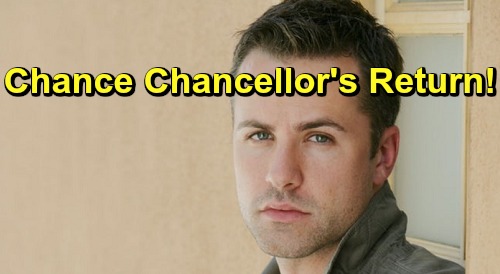 The Young and the Restless (Y&R) spoilers tease that Chance Chancellor is set to return in the next few weeks. The only question fans have is if John Driscoll will reprise the role. Chance is becoming a big plot in the Adam Newman (Mark Grossman) storyline. Y&R spoilers state that it’s all building up to Chance’s return.

Jill Atkinson (Jess Walton) is now looking for him and she’s determined to track him down. She wants answers to why he was in cahoots with Adam in Las Vegas.

Jill Atkinson Shocked That Chance Chancellor Is In Las Vegas

Jill just learned that Chance is in Vegas and he’s working with Adam in some way. She cannot believe he would associate with him. The Young and the Restless spoilers state that Jill told Nick Newman (Joshua Morrow) that she will find out what’s going on with Chance and she will let him know.

The way the storyline is going, Chance’s entry is a given. He is intertwined into Adam’s storyline in a confusing way. All we know about his connection to the Newman bad boy is he was arrested, and Adam was the one who bailed him out.

Could Chance Chancellor Be Savior In Christian Custody Battle?

As for what is next for Chance, we know that Jill will not give up on finding him. She will probably hire someone to track him down. She will eventually find him and she will want answer as to why he helped Adam.

Chance might be Nick’s savior in a custody battle. Chance might know something that could help or hurt Nick’s custody case. The Young and the Restless spoilers tease that Nick will find out something shocking from Chance, which suggests that the character will be returning.

So far, CBS has not released a comment on Chance’s return. Do you want Chance Chancellor III to return to Genoa City? Why did he work with Adam in Vegas? Don’t forget to come back to CDL later for more The Young and the Restless (Y&R) spoilers, news, and casting updates!