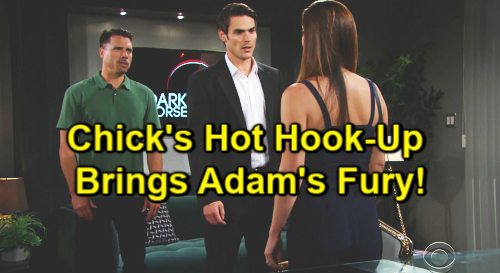 The Young and the Restless (Y&R) spoilers tease that Nick Newman (Joshua Morrow) will grow closer to Chelsea Newman (Melissa Claire Egan). After Chelsea returned to Genoa City, it didn’t take long for Nick to stick to her like glue.

He was drawn to Chelsea from the get-go, but Calvin Boudreau’s (John Burke) death really sealed the deal on this “Chick” reunion.

Chelsea moved in Nick’s place and quickly found comfort in him. He helped Chelsea deal with her grief – although she didn’t care all that much if she’s putting Calvin behind her so soon! Chelsea has also found support through this whole ordeal with Adam Newman (Mark Grossman), but she’ll need more support thanks to Adam’s latest move.

Adam’s marriage proposal to Sharon Newman (Sharon Case) is sure to leave Chelsea rattled. He was willing to do just about anything to reunite with Chelsea not too long ago. Chelsea may face a mixture of anger, jealousy, confusion and pain. She’ll likely be a mess of emotions, but Nick never minds being a shoulder to cry on.

Since Sharon’s involved here, Nick may need to lean on Chelsea a bit, too. Part of Nick will always love Sharon, so he’ll be frustrated over Adam’s relentless manipulation. There may be some other things that push Chelsea and Nick together along the way. Adam’s plotting to destroy Victor Newman (Eric Braeden) and the entire Newman family, so he could pull a stunt that brings Nick and Chelsea closer.

Regardless, The Young and the Restless spoilers say Chelsea and Nick will take a big step forward. During the week of August 26-30, these two will turn up the heat!

Adam Newman Will Lash Out At His Brother Nick Newman

That certainly makes it sound like they’ll enjoy a hot hookup. A reunion in the bedroom has to be coming up eventually, so it might as well be then. There’s no reason for Y&R to wait since they’re going all in on “Chick” right now.

Will the news of Nick and Chelsea’s hot session get back to Adam? Will he retaliate in some way? The Young and the Restless spoilers say Adam could have another reason to lash out, so don’t miss more of this brother battle.