The Young and the Restless Spoilers: Chelsea’s New Husband Revealed – Who Took Adam’s Place in Chelsea and Connor’s Lives?

BY Kinsley Goldman on June 11, 2019 | Comments: one comment
Related : Soap Opera, Spoiler, Television, The Young and the Restless 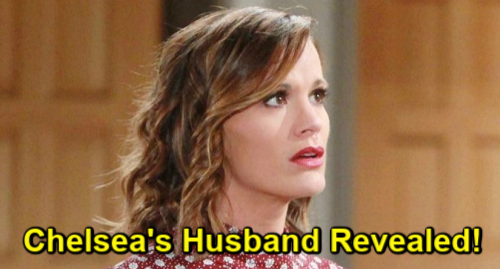 The Young and the Restless (Y&R) spoilers tease that Chelsea Newman (Melissa Claire Egan) will head back to the CBS soap soon. Adam Newman (Mark Grossman) still loves Chelsea and wants to put their family back together, but there’s a big problem.

Chelsea has remarried – at least that’s what she claims. She even suggested her new husband had adopted Connor Newman (Gunner and Ryder Gadbois).

However, it’s wise to be suspicious of anything Chelsea says. She can’t be trusted, so it’s possible she just made those claims to keep Adam away. After all, it seems like Chelsea would want to avoid drawing attention to herself with marriage and adoption paperwork. She’s living under a new identity somewhere, so it’s best not to leave a paper trail that could trip her up.

Could It Be Jordan Wilde?

On the other hand, this is a soap and sometimes details like that are ignored. There’s a chance Chelsea really did find a new husband. If that’s true, could it be someone we’ve already met?

Some Y&R fans have suggested Jordan Wilde (Darnell Kirkwood) as an option. Jordan used to run cons with Chelsea once upon a time, so it wouldn’t be unreasonable for them fall for each other now.

In an interview with Soap Opera News, Kirkwood touched on the possibility of Jordan tying in with Chelsea’s return. “Their history was never detailed so that always leaves room for them to reconnect,” Kirkwood said. “I’m not sure if Jordan will be making an appearance but if so, I look forward to seeing what he has been up to.”

Of course, that doesn’t sound very promising. Kirkwood clearly doesn’t have anything lined up with Y&R yet, so that probably means we can rule him out. Nevertheless, there are surely some other past characters that could fit here. The Young and the Restless spoilers say some surprise returns are on the way, so Chelsea’s new husband could be a familiar face.

Then again, this could be a newbie that we meet briefly or never meet at all. “Chadam” is the pairing to root for. The real goal is getting Chelsea back to Genoa City and on the road to a reunion with Adam! The Young and the Restless viewers won’t want to miss what’s in store.

Do you think Chelsea really remarried? Did she find love with someone new or a hunk that Y&R fans already know? We’ll give you updates as other Y&R news emerges. Stay tuned to the CBS soap and don’t forget to check CDL often for the latest Young and the Restless spoilers, updates and news.

Well well well, what do we have here… #chadam #yr @MarkGrossman pic.twitter.com/MHxO315wWq