BY Heather Hughes on June 11, 2019 | Comments: one comment
Related : Soap Opera, Spoiler, Television, The Young and the Restless 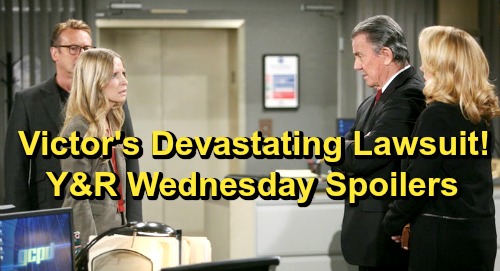 The Young and the Restless (Y&R) spoilers for Wednesday, June 12, tease that it’ll be a big day for Victor Newman (Eric Braeden). For starters, he’ll make another pitch to Adam Newman (Mark Grossman) about his future. Victor believes Newman Enterprises is where Adam needs to be. He’ll insist that Adam’s the only one he can trust with his legacy, but Adam will vehemently disagree.

Adam certainly hasn’t done anything to earn Victor’s trust since he came back to town. He’s also been clear about his lack of interest in the company. Unless Victor can get him custody of Christian Newman (Jude and Ozzy McGuigen), Adam isn’t interested in helping his father. He’d rather create his own path on his own terms, so that’s exactly what he’ll tell Victor in Wednesday’s Y&R episode.

The Young and the Restless spoilers say Victor will protest, but Adam will stick to his guns. He’ll contend that Victoria Newman (Amelia Heinle) actually cares about Newman Enterprises and urge Victor to give her a real shot instead. Regardless, Adam will maintain that Newman isn’t the place for him.

It turns out Victoria has some sort of secret that’ll be revealed on Wednesday. Perhaps she’s been working on a little something that could impress Victor. Victoria vowed to fight for her spot at Newman, so this is her big chance. She needs to step up and make herself so indispensable that Victor has to let her lead the way.

Victoria has to work twice as hard now that her golden boy brother is around! It’s not fair, but it’s just how it is with Victor. Of course, things could change if Adam crosses the line and pushes Victor too far. It’ll be interesting to see where Victor and Adam’s complex relationship goes from here.

In the meantime, Victor will have another issue to concentrate on. Christine Williams (Lauralee Bell) is in for a shock when she realizes Victor filed a lawsuit against the GCPD. She’ll fume over this vengeful move, but does she really have a right to be mad? After the way Christine and her team botched the J.T. Hellstrom (Thad Luckinbill) case, they’re lucky to still even have jobs.

However, Christine may feel like the Newmans themselves were to blame. If that case is indeed what this lawsuit is about, Christine could argue that Victor, Victoria and Nikki Newman (Melody Thomas Scott) were never forthcoming. They told so many versions of the story, but none of them were the right one – not until Victoria was forced to come out with it on the stand.

Even so, that case was a mess and Christine deserves to face some drama for how she handled it. Over with Paul Williams (Doug Davidson), he’ll dig deep as he explores Phyllis Summers’ (Gina Tognoni) disappearance. It seems likely that some new clues will surface soon enough. Will Paul find hints that bring suspicions about Kevin Fisher (Greg Rikaart)?