The Young and the Restless Spoilers: Double Baby Bomb for Kyle – Lola AND Summer Get Pregnant? 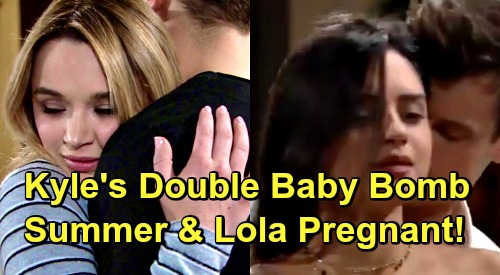 The Young and the Restless (Y&R) spoilers reveal that Kyle Abbott (Michael Mealor) is making up for the lack of love over the last year or so. Since Michael Mealor’s debut in the role, Kyle has spent most of his time seemingly celibate. It was a strange choice since Kyle’s quite the hunk and most viewers tend to enjoy some afternoon steaminess.

Once Kyle started dating Lola Rosales (Sasha Calle), he still wasn’t getting any love in the bedroom. Lola revealed she was a virgin and wanted to wait on having sex for the first time, so Kyle tried to be patient. However, Lola’s about to change her mind and it set off a crazy chain reaction for Kyle.

Of course, Kyle has also been having some hot sex sessions with his new wife. Summer Abbott (Hunter King) knows this is the one area she has the upper hand in. She’s working this angle since she believes it’ll help her gain points over Lola in Kyle’s eyes. Summer’s apparently wrong about that since Lola will practically throw herself at Kyle this week.

Lola’s virginity was something that was quite important to her, but that was before she lost Kyle. Now she’s miserable and stuck pining, so Lola will be willing to toss her old mentality out the window. She’ll take advantage of how much Kyle wants this when she asks him to get a room with her at the GCAC.

The Young and the Restless’ weekly promo shows some sizzling scenes, so it looks like Lola and Kyle will indeed go all the way. Naturally, this presents an interesting possibility. Kyle’s having sex with two women in a short amount of time, which is risky in the world of soaps. Pregnancies are quite common, so Kyle could easily face a double baby bomb.

Will both Summer and Lola end up pregnant? It’d be a crazy dilemma for Kyle to sort through. He’s not ready to be a dad to one kid, let alone two by two different women. Nevertheless, Y&R could throw that at him. Characters don’t often make the choice to be parents on daytime dramas. Parenthood tends to be thrust upon them instead.

It appears Phyllis Summers’ (Gina Tognoni) spy will catch “Kola” cheating and blackmail Kyle over it. A pregnancy for Lola could force the secret out into the open. Kyle would want to stand by Lola and ditch Summer, but what happens if Summer’s pregnant, too? That could bring a big mess!