BY Heather Hughes on December 19, 2019 | Comments: one comment
Related : Soap Opera, Spoiler, Television, The Young and the Restless 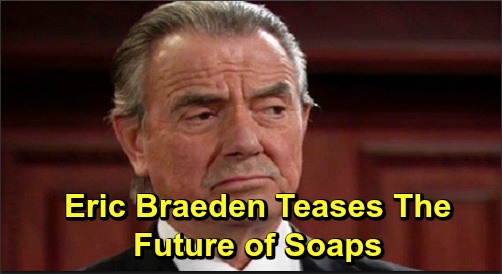 The Young and the Restless (Y&R) spoilers reveal that Eric Braeden (Victor Newman) is speaking out about the future of soaps. If you follow Braeden on Twitter, you know that he often interacts with his fans there. Braeden is great about chiming in with his own comments and retweeting tweets he agrees with. He had something interesting to say in a recent Twitter conversation – and it involves what the future holds for the soap world.

People who don’t watch soaps often don’t understand the passion and loyalty behind them. They don’t seem to understand the fun of them either! There’s no other genre quite like soap operas, and that’s why it’s crucial to keep them alive.

One Twitter user offered her thoughts on the matter. “I hear sometimes that soaps are a dying breed,” she said. “I don’t agree. My daughter is twenty-one and she LOVES Y&R and so do her friends. They never miss it, it’s a part of their day as it is for me. It’s not just baby boomers who love the show!”

That’s an excellent point and clearly illustrates why Y&R should have balance. We need to see a nice mix of every age group. Thankfully, The Young and the Restless has a very talented cast across the board. They’ve got stellar performers that are younger, older and everything in between.

Soaps have to feature the vets people have come to know and love, but they can’t forget about building up the next generation – who will be the new vets if the soaps stick around like we want them to! That can be a tricky balancing act, and some regimes do it better than others. There have definitely been complaints about the current regime’s tendency to focus on just a few characters.

However, the important thing is to keep soaps on the air with characters we love and stories that entertain us. Braeden echoed the fan’s comment about soaps hopefully surviving and thriving. He tweeted, “I completely agree! We certainly don’t need any more talk shows or “reality” shows! PLEASE!!!” Even when Y&R isn’t at its best, it’s far better than the alternative.

Of course, there’s been some strong buzz about The Young and the Restless looking for a new head writer. Considering so many stories go on too long or go nowhere at all, that might be a good idea. Perhaps a scribe swap could lead to the ratings boost Y&R needs.

Regardless, Braeden has a positive outlook when it comes to the soap genre – and fans should, too! It sounds like some changes are coming behind the scenes, so that’s yet another reason to be hopeful for Y&R’s future.