The Young and the Restless Spoilers: Lola Goes Ballistic Over Kyle’s Cousin Takedown – Theo Gets Revenge by Seducing Kyle’s Wife? 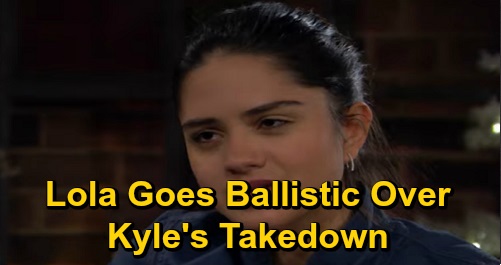 The Young and the Restless (Y&R) spoilers tease that Kyle Abbott (Michael Mealor) could regret pushing Theo Vanderway (Tyler Johnson) too far. Y&R fans know Theo drove Kyle up the wall for months, but he’s tried to settle down and focus on his job lately. However, Kyle understandably can’t shake his former perception of his cousin.

It’d be best for Kyle to take a step back and let Theo either prove he’s changed or show his true colors. Unfortunately, it looks like Kyle won’t be able to resist stirring the pot. In Wednesday’s episode, there’s a mix-up over the date of Theo’s meeting. He misses an important one and has to reschedule in hopes of closing the deal. That leads Theo to accuse Kyle of sabotage, but Kyle denies it.

Whether Kyle was behind the blunder or not, there’s a reason Y&R made him co-CEO with Jack Abbott (Peter Bergman). They’re giving Kyle more power over Theo and further fueling this cousin war. You can bet they’ll be another mysterious blunder or two. Even if Kyle wasn’t behind the first error, he could take advantage of the opportunity and stage a couple more.

It’s easy to imagine Jack deciding Theo just isn’t cut out for the job – especially if Kyle’s pushing him to make that call. Of course, Lola Abbott (Sasha Calle) would be first in line to offer sympathy to Theo. She’s been his biggest supporter ever since he scored this position.

Lola has naturally supported Kyle as well, but that may not be the case for much longer! If Lola realizes Kyle had anything to do with Theo’s potential firing, “Kola’s” marriage will be in total turmoil. Lola considers Theo a friend, so she won’t appreciate it if Kyle tries to blow up his cousin’s world. It could be Kyle who faces a blown-up world instead!

The Young and the Restless has been building toward something for months with this quad. The pairings they seem to be gearing up for are Lola and Theo as well as Kyle and Summer Newman (Hunter King). It’s probably just a matter of who will cheat first – and it may be Lola and Theo based on how the story’s shaping up.

After all, Lola could end up furious with Kyle for setting out to destroy Theo. Meanwhile, Theo may want a good dose of revenge. He’s also been pining for Lola, so it makes sense for Theo and Lola to land in bed together first.