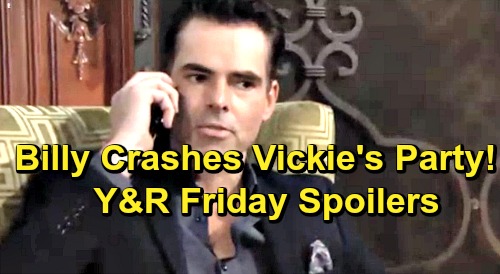 The Young and the Restless (Y&R) spoilers for Friday, April 5, tease that Billy Abbott (Jason Thompson) will take charge. He hasn’t been able to reach Victoria Newman (Amelia Heinle) in Las Vegas, so he’ll choose another tactic. It looks like Billy will catch a flight to Vegas and confront Victoria face to face. Billy will do whatever it takes to put a stop to Victoria’s crazy behavior.

Victoria can’t seem to cope with everything she’s been through, so she’s shoving it aside. She’s trying to pretend all the J.T. Hellstrom (Thad Luckinbill) drama doesn’t exist for a while. No one can blame her for that, but Billy’s concerned about her partying with strangers – especially the handsome one! You can bet Billy will show signs of jealousy when it comes to Brandon Rose (Mitch Eakins).

This should lead to a fight between Victoria and Billy, but that’ll be the perfect time for sparks to fly. Anger can bring passion when deep feelings are involved, so Y&R fans can expect “Villy” to heat things up next week. Back in Genoa City, Jack Abbott (Peter Bergman) will support an ex, too. Phyllis Summers (Gina Tognoni) lost the CEO spot to Jack, but it appears they’ll move past that quickly.

Deep down, Phyllis must know she deserved to be fired. She was already on thin ice over the J.T. scandal, so the whole Dominique Caroll (Alice Hunter) thing really sealed the deal. Phyllis didn’t do her research and neglected to make Dominique sign a non-compete clause. Jack and the others were duped as well, but Phyllis was the one in charge and the buck has to stop here.

Perhaps Phyllis will acknowledge that as she talks to Jack on Friday. She may even admit Jabot belongs in Jack’s hands. That’s the path John Abbott (Jerry Douglas) had in mind for Jack, so all is right in the Abbott world. Now it’s just a matter of taking on Ashley Abbott (Eileen Davidson) and keeping the struggling company afloat.

The Young and the Restless spoilers say Phyllis and Jack will strengthen their bond again. They’ll get their friendship back on track and lift each other up, but more trouble could be brewing. Michael Baldwin (Christian LeBlanc) will have some disappointing updates in Friday’s episode. He’ll probably tell Lauren Baldwin (Tracey E. Bregman) there’s no way to get Fenmore’s out of their Jabot contract.