The Young and the Restless Spoilers: Vickie’s Vegas Flirt, Billy’s Vegas Gamble – Can He Save Victoria?

BY Sean O'Brien on April 3, 2019 | Comments: one comment
Related : Soap Opera, Spoiler, Television, The Young and the Restless 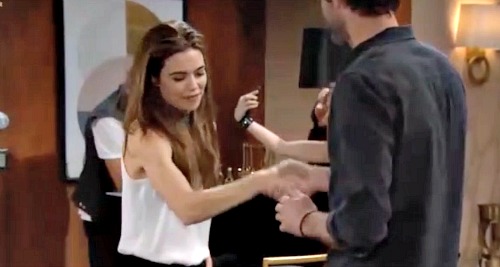 The Young and the Restless spoilers tease that Vickie’s (Amelia Heinle) impulse jaunt to Las Vegas has at least one impact on Villy’s potential reboot. Billy (Jason Thompson) is rightfully worried about the love of his life, but hopefully won’t be triggered into a gambling addiction rebound. Instead, he’s considering a different type of odds.

Brandon (Mitch Eakins) is intriguing. For Vickie, he’s a break from all things Genoa City, even though he saw through her faux name. The Newman’s are famous, as the popular band member knew her real name.

With the J.T. (Thad Luckinbill) storyline having ended, Y&R wrote Heinle’s character away from tense settings. In effect, they had Vickie run away from home.

Meanwhile, Billy is very concerned about his children’s mother. He instantly sensed something weird was up after learning that Vickie wanted to leave town on a so-called business trip. It made no sense, considering that she’d just returned home after spending weeks in jail and after having endured the J.T. reveal at the Abbott cabin.

Vickie just wants to decompress. Her health hasn’t been good since prior to the time when the coverup crew thought they’d solved the J.T. problem.

Now, finally past the horror show that stretched from April 13, 2018, until March of this year, Vickie wanted to temporarily escape from her world. However, Mitch changed the trajectory of her trip.

Whether Eakins remains with the cast is to be determined. He could simply be a plot vehicle that furthers a Villy comeback storyline. Then again, Brandon might be the new guy that Billy will fight against in the ongoing struggle to reunite his family.

How ironic it is that Billy and Vickie have switched personality places? Billy became the dependable one since late last year, with Vickie being unstable for reasons that were later revealed, those being linked to the lingering J.T. issue.

Billy needs to remain committed to Vickie now more than ever. No matter what happens in Vegas and no matter what develops with Brandon, Villy’s children are the most important consideration, which is why Vickie’s well-being matters.

Just as Vickie often saved Billy’s bacon, he too can now be the man she’s always wanted. Doing so may not result in a long hoped-for reunion, or it could. But Johnny (Ryan and Holden Hare) and Katie’s (Sienna Mercuri) mother is not fully stable, as Thompson’s character recognizes.

Billy needs to play this one straight, with no bluffing, and not fold his cards. Vickie’s life might dependent on it, whether she realizes it, or not. CDL is a leading source for everything linked to The Young and the Restless. Check back regularly for Y&R spoilers and news!