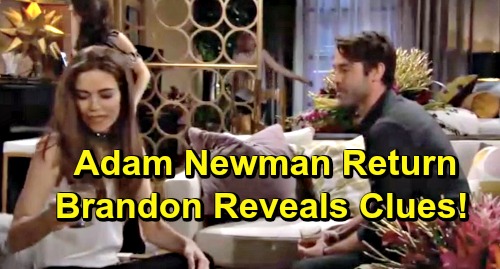 The Young and the Restless (Y&R) spoilers tease that Victoria Newman’s (Amelia Heinle) trip to Las Vegas could turn into so much more. She’s using this as a chance to let loose and get away from her problems, but she’s actually setting up a new storyline. Brandon Rose (Mitch Eakins), the hot band member she meets on Wednesday, will somehow play a role in setting up this mystery.

Victoria hits it off with Brandon and accepts his phone number, so these two will definitely meet up again. Brandon is set to appear in multiple episodes, which means he’ll provide some clues along the way. However, The Young and the Restless spoilers say Billy Abbott and Victoria will bring the heat next week. Will he follow Victoria to Vegas and ultimately get wrapped up in this mystery, too?

There’s another piece of the puzzle to consider and this one connects to Billy. Y&R fans can expect Billy’s old acquaintance, Sinead (Lira Kellerman), to make an appearance on April 10. Sinead was Billy’s poker rival, but she could be a useful source of info this time around. Y&R’s staying tight-lipped on all the details here, but there’s one possibility we can’t ignore.

The Young and the Restless spoilers say Mark Grossman will debut as an Adam Newman recast down the road. Now that Josh Griffith’s solo work as Y&R’s head writer is hitting the screen, it’s time to start dropping some Adam hints. Will Victoria find an Adam trail to follow? Will Brandon and Sinead know something that could help Victoria find her brother?

Victoria would struggle to believe Adam was alive at first, but she’d eventually have to consider it. This could be something that gnaws at her until she just can’t take it anymore and has to know the truth. Putting Billy in the middle of all this would be a great way to help him bond with Victoria. Love could bloom while they sort out all the facts.

Plus, Adam is responsible for the death of Delia Abbott (Sophie Pollono). That adds an interesting layer of drama since Billy could play a role in bringing Adam back to Genoa City. Of course, Adam may not actually be in Vegas right this minute. Perhaps it was just a stop for him at some point. Since this is a mystery, perhaps Victoria will fill Victor Newman (Eric Braeden) in and let him continue the search.