BY Heather Hughes on November 7, 2019 | Comments: one comment
Related : Soap Opera, Spoiler, Television, The Young and the Restless 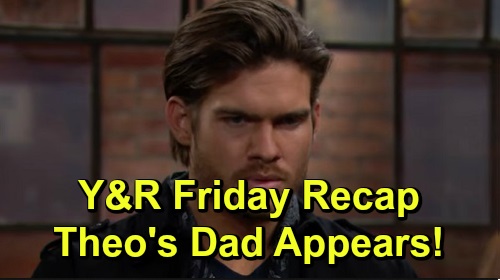 Devon will admit he found Tucker, who was indeed on a spiritual journey like they’d heard. Tucker was at a commune and assured Devon that he didn’t have anything to do with the forged will. Devon will confess that he believes Tucker, so he’ll begin to wonder about Phillip “Chance” Chancellor IV (Donny Boaz). He won’t be so sure Chance is the boy scout everyone made him out to be.

At Society, Nate Hastings (Sean Dominic) will find Cane Ashby (Daniel Goddard) talking about his new fortune over the phone. Once Cane ends the call, Nate will suggest that he wasted no time. Cane will point out that the money was left to him, but Nate still won’t understand why Katherine Chancellor (Jeanne Cooper) would pick him. After Cane defends her choice, he’ll insist he’s going to make Katherine proud.

Other Young and the Restless spoilers say Adam Newman (Mark Grossman) will spot Theo Vanderway (Tyler Johnson) and introduce himself. Since Theo is now connected to the Abbotts, Adam will contend that it makes him interesting. He’ll reflect on finding out he was a Newman right around Theo’s age. Adam will bond with Theo about how overwhelming it can be and advise him not to take advantage of Jack.

Once Adam’s gone, Theo will get a visit from his dead father. Eric Vanderway (Jon Briddell) will appear to Theo and give his son some advice. Theo will note that some people want him to embrace his place in the Abbott clan while others want him to pull back. He won’t be certain of what to do, but Eric will insist that Theo’s opinion is the only one that matters.

Theo will mention Dina Mergeron (Marla Adams) and how she wanted Eric to have a good life. Eric will promise that he did and add that he wants Theo to have a good one as well. Once Eric’s finished his helpful spiel, this vision of him will vanish.

At the Grand Phoenix, Chelsea Newman (Melissa Claire Egan) will face more threats from Simon Black (Jeffrey Vincent Parise). He’ll bring up Connor Newman (Judah Mackey) again and provoke Chelsea’s fury. Simon will contend that he wants to leave the kid out of it, but he may be forced to do the unthinkable if Chelsea doesn’t cooperate. Simon will make it clear that this is Chelsea’s final warning.

Chelsea will head to Adam’s penthouse soon after. She’ll fib about wanting to take herself out of the equations while Adam goes off to bond with Connor. Chelsea will think it’d be good for Connor to learn about his roots, so she’ll push Adam to take him to Hope Wilson’s (Beth Toussaint) farm. Adam will suggest Chelsea should come with them, but she’ll insist they don’t need her there.

It won’t be long until Adam suspects something’s up, so he’ll grill Chelsea about what she’s hiding. Chelsea will contend that she’s just got a lot on her plate. Y&R spoilers say she’ll shut down the interrogation, so Adam will decide to take Connor to the farm tonight.

Back at the Grand Phoenix, Amanda Sinclair (Mishael Morgan) will speak with someone over the phone. She’ll talk about having a tracker so she always knows someone’s whereabouts. Afterward, Amanda will get a visit from Cane Ashby’s (Daniel Goddard) and express relief that she’s done with the case. They’ll discuss the trust funds Cane’s set up for the twins, and Amanda will vow to print the final paperwork.

Downstairs, Nate will notice Amanda staring at a man and looking unsettled. She’ll brush off the incident and turn her attention to Nate’s legal drama. Up in Cane’s suite again, he’ll be stunned when Chance kicks the door in and delivers a fierce punch!