The Young and the Restless Spoilers: Y&R Alum William Wintersole Dead At 88

BY hellodrdavis on November 7, 2019 | Comments: one comment
Related : Soap Opera, The Young and the Restless 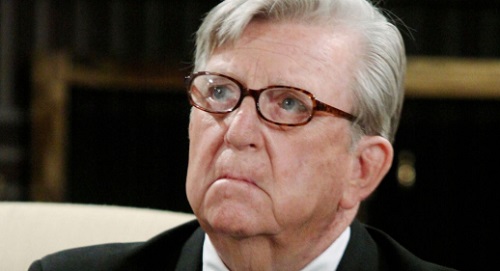 The Young and the Restless spoilers has some sad news to pass on. William Wintersole, who portrayed attorney Mitchell Sherman on the CBS soap for over 20 years, has passed away at the age of 88 due to complications from cancer.

William’s daughter announced her father’s death on Facebook. “My beautiful father, William Wintersole, passed in the stealth of the night at age 88 Tuesday 11/5/19,” she wrote. “As a Hollywood actor for 60 years, he touched many people’s lives. I did EVERYTHING I could for him…and that brings me peace. But alas…I miss him so. One Love!”

You might remember William’s character, Mitchell Sherman, who last appeared on the show in 2011 and was an attorney and confidante for Katherine Chancellor (Jeanne Cooper) as well as a corporate attorney for Newman Enterprises for a time. Mitchell’s name recently came up on the show, as Amanda Sinclair (Mishael Morgan) told Devon Hamilton (Bryton James) that he had passed away off-screen.

William was born in Portsmouth, Ohio in 1931, and his acting career began in the 1960s. His first role was in the film The Ugly American in 1936, and he also starred in Seconds in 1966 with Rock Hudson.

William had an amazing television acting career as well. He appeared on General Hospital as Ted Ballantine in the 1980s, who was Robert Scorpio’s (Tristan Rogers) boss for a time. William also appeared as a character actor on numerous television series, such as Little House On The Prairie, Bonanza, Quincy, Star Trek, and I Dream Of Jeannie.

William also had roles in made-for TV movies, such as Strange Voices, The Day the Bubble Burst, and And the Band Played On. He was a gifted actor who will be missed.

William is survived by his partner Marlene Silverstein, and his daughters Tiffany Harmon and Katherine Ramsey, as well as three granddaughters.

Our sincerest condolences go out to William’s family at this time. Stay tuned to the CBS soap and don’t forget to check CDL often for the latest Young and the Restless spoilers, updates, and news.