The Young and the Restless Spoilers: Friday, October 18 Review – Connor Gets Aggressive – Cane Gets Katherine’s Will Originals 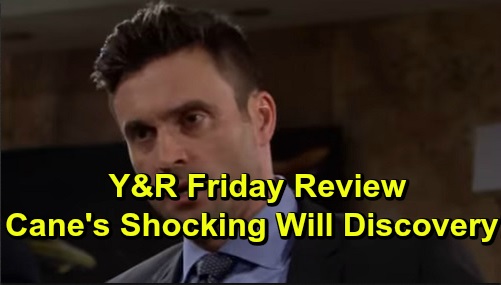 The Young and the Restless spoilers review for Friday, October 18, tease that Chelsea Lawson (Melissa Claire Egan) and Nick Newman (Joshua Morrow) will be on cloud nine after their great family evening with the boys. They’ll gush that things are looking up, and Chelsea will even indicate that she has forgiven Nick for pretending that his father died. She’ll realize that he was in a difficult spot, and that she’s made mistakes, too. They’ll plan a romantic evening together after they put the boys to bed.

However, Nick won’t be able to find Christian Newman (Alex Wilson). They’ll ask Connor Newman (Judah Mackey) if he’s seen Christian, but he’ll say no and that he may be in the back yard. Chelsea and Connor will be on their way to look in some of Christian’s favorite hiding spots when Nick returns with Christian, who’s crying. Turns out, Connor locked Christian in the garage because he was “whiny.”

Connor will obviously be in trouble, and he’ll sarcastically ask his mom is she’s going to send him away, like his dad. After sending Connor to his room and forcing him to apologize to Christian, Chelsea and Nick will argue about whether to try to get Adam Newman (Mark Grossman) to return. Nick won’t like the idea, but Chelsea will say that Adam needs to come back and fix the problem he’s caused.

Later, they’ll summon Phyllis Summers (Michelle Stafford) to the house to ask her where Adam is. She’ll balk at first, thinking that perhaps this is a trap to bring Adam back to prosecute him for double-dosing Victor Newman (Eric Braeden), but Chelsea will assure her that this is about Connor. Ultimately, Phyllis will fork over the information on where to find Adam, and later Nick will decide to head to Las Vegas and get him.

Interestingly, ongoing Y&R spoilers indicate that Connor will soon end up at the hospital for some reason. Perhaps he’ll physically hurt himself (or someone else) via his acting out, but it seems like that should be enough to get Adam back in Genoa City for the time being. One wonders if Connor’s behavior problems are going to stop with the return of Adam – things are looking more serious, as if he’s got some problematic tendencies that may have been triggered by Adam.

Meanwhile, on the new episode of Y&R on Friday, October 18, Cane Ashby (Daniel Goddard) will awaken in a small dark room in Las Vegas. His head will be sore from being hit, and he’ll turn on a light and realize there’s an envelope lying on a table nearby. He’ll open the envelope, and it will contain the original pages of Katherine Chancellor’s (Jeanne Cooper) will. The door to the room will be open, and Cane will exit.

Back in Genoa City, both Devon Hamilton (Bryton James) and Nate Hastings (Sean Dominic) will talk with Amanda Sinclair (Mishael Morgan). First, Devon will bump into Amanda at The Grand Phoenix and he’ll try a nice approach. He’ll tell her that he thinks she’s being taken advantage of, and that he’d like to help. They’ll end up bickering and she’ll accuse him of trying to bribe her and pay her off, which he’ll deny. Devon will finally get annoyed and tell her that she can either go home or go down in flames.

Later, Nate will be at The Grand Phoenix to see Abby Newman (Melissa Ordway), who won’t be there. He’ll see Amanda, who will assume that he’s there to see her because of Devon. They’ll talk for a bit and Amanda will open up a little about her frustration over getting no cooperation from her client. Nate will suggest that she give the case to her business partner, but she’ll state sadly that her partner died. Nate will offer his sympathies.

Clearly, Nate and Amanda have some chemistry, and Amanda seems most willing to open up to him, despite his closeness to Devon. She revealed something potentially big when she revealed that her business partner had died – perhaps this will be a reason that she’ll need to come to Genoa City and stay.