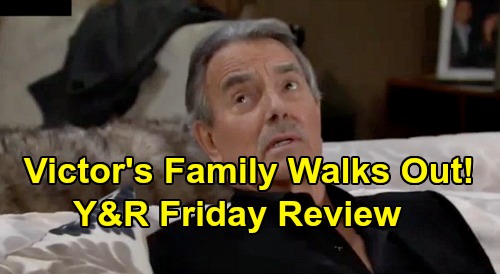 The Young and the Restless spoilers review for Friday, October 4, tease that the Newman family will continue to suffer as a result of the fallout from Victor Newman (Eric Braeden) faking his death. Summer Newman (Hunter King) will remain estranged from the family who deceived her, and Nikki Newman’s (Melody Thomas Scott) family dinner will end up being a complete bust.

The evening will start out with talk about those who aren’t there – Summer, Chelsea Lawson (Melissa Claire Egan), and Connor Newman (Judah Mackey), and that will cause some bickering. Victor will open up the floor for everyone to voice their concerns and say anything they want to say to him, to clear the air. Victoria Newman (Amelia Heinle) will start by expressing her personal frustration.

She’ll point out that the ruse has caused serious damage to the business and to the family’s reputation, and she’ll relay that another mother congratulated her for getting out of jail again when she was picking up the kids earlier. Victor will then openly diminish her suffering, pointing out that she was cleared of all charges.

Then Nick Newman (Joshua Morrow) will pipe up about Summer being upset, Faith Newman (Alyvia Alyn Lind) being glad to be away at boarding school, and Connor being hurt by his father’s departure. And Billy Abbott (Jason Thompson) will observe that the ruse hurt everyone except Adam Newman (Mark Grossman). Victor will then vehemently disagree, noting that he thinks Adam paid a bigger price than everyone else, since he was humiliated and separated from the family.

The Young and the Restless spoilers say everyone but Abby Newman (Melissa Ordway) will balk at that. She’ll argue that they all made the decision about the ruse together, something that Nate Hastings (Sean Dominic) clearly won’t agree with. Ultimately, everyone will leave before dinner even occurs, unable to stomach Victor defending Adam. And after they’re gone, Victor will tell Nikki that of all his children, Adam needs him the most.

Clearly, Victor has a big problem on his hands, although he doesn’t seem to realize it. His family’s unhappiness is staring him square in the face, yet he refuses to acknowledge that he continually diminishes their feelings and their well-being…all for the sake of dealing with and/or defending Adam.

Meanwhile, Cane Ashby (Daniel Goddard) will start his quest to track down Chance Chancellor (John Driscoll) to help Devon Hamilton (Bryton James) get to the bottom of the issue with Katherine Chancellor’s (Jeanne Cooper) will. He’ll try to get intel from both Nick and Nate about Adam’s possible whereabouts, since Chance was last seen in Las Vegas with Adam. Neither will help him, however.

Cane will have a bit more luck with Rey Rosales (Jordi Vilasuso), who will drop Riza Thompson’s (Tina Casciani) name. That will give Cane something to go on, but he’ll also speak with Phyllis Summers (Michelle Stafford), who won’t offer him any information but will be quite intrigued by the fact that he’s searching for Adam. Phyllis will then follow Cane to Crimson Lights, where she’ll hear him making arrangements to fly to Las Vegas.

Naturally, all of this would interest Phyllis, since she previously picked up on a connection between Adam and Chance. In fact, at one point it was something that she lorded over Adam’s head, as if it were some big scandalous piece of information. Could Phyllis know more about the Chance/Adam connection than she’s letting on?