The Young and the Restless Spoilers: Gina Tognoni’s Phyllis Goes Out With A Bang – Michelle Stafford’s Revival Begins This Summer 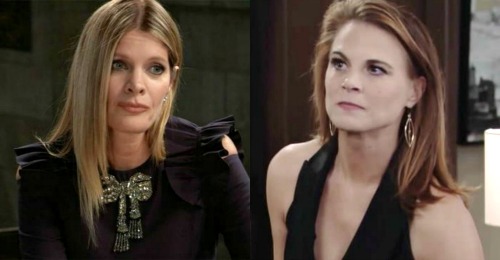 The Young and the Restless spoilers tease that Phyllis’ (Gina Tognoni) recent actions, post the epic J.T. (Thad Luckinbill) storyline and recent reveal, wink hard at the past. Yes, the old school version of Phyllis is using a private detective to document Kyle’s (Michael Mealor) moves in order to make Summer (Hunter King) see the light.

Regular readers know that this author likes Tognoni and Michelle Stafford (the once and now recast Phyllis). Both actors delivered in their efforts where Red is concerned. Different takes infused viewers with alternative editions of this classic character, which served to broaden storylines.

Tognoni will end her four-plus year tenure within the next few weeks, according to information she’s posted on her Instagram feed. As soap operas record approximately six weeks in advance, Tognoni’s version of Phyllis will depart by approximately early June.

After debuting in the fall of 2014, Tognoni’s first meaty arc involved Marco (Peter Bergman in a dual role). The breadth of that unforgettable storyline set the tone for who Tognoni’s Phyllis would become.

She’s been vulnerable ever after, despite moments when Phyllis appointed herself as the coverup crew’s fixer. In effect, Tognoni became a softer image of this alter ego.

Y&R was smart to tap Tognoni’s specific talent to follow Stafford, who was the Phyllis original. In doing so, Tognoni created terrifically nuanced performances that would not have been possible before. As such she was rightly honored with a Daytime Emmy Award.

Stafford’s two Daytime Emmy awards and the span across time when she created and developed her Phyllis began in 1994. Including breaks and when Sandra Nelson did a solid job filling in (1997-1998), Stafford’s second Y&R stint ended in 2013.

In daytime, fans know that any actor who leaves and is working elsewhere can always return, as Stafford will do when she’s fulfilled the terms of her contract at General Hospital. So while her rehire was surprising, this move represents regular business in the world of daytime drama.

Intended, or not, Y&R’s writers are driving Phyllis back to where viewers remember her, circa 2013. Yes, Stafford’s Phyllis would have paid someone to snoop on her own daughter, under the guise of concern.

It’s also known that Kola does love each other, with Skyle getting short shrift, as Miss Summers suspects. But as Christine (Lauralee Bell) and Sharon (Sharon Case) specifically know, Phyllis’ motives and methods are often the problem.

Tognoni’s departure was surprising and she’ll be missed. But this superb actor’s accomplishments aren’t diminished by the announced recast. Seasoned soap fans are also looking forward to the Phyllis reboot, as that will renew their focus once more.