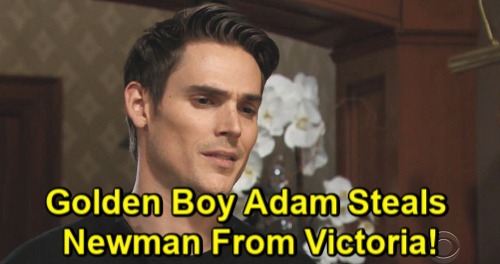 The Young and the Restless (Y&R) spoilers tease that Victoria Newman’s (Amelia Heinle) bliss may be short-lived. She was furious when she realized Victor Newman (Eric Braeden) was taking back control of Newman Enterprises, so she decided to do something about it.

Victoria is tired of being disrespected, but Victor’s ultimate CEO shocker will leave her hopeful that things have turned around. His decision to hand over the reins permanently will make Victoria think this is truly her time to shine.

Of course, permanent isn’t really a concept that exists on The Young and the Restless. Nothing is permanent! That’s especially true when Adam Newman (Mark Grossman) is always going to be Victor’s golden boy. The rest of the family may not like it, but Adam is clearly Victor’s favorite. Victor doesn’t like it when Adam refuses to play by his rules, but when Adam’s loyal? He’s the apple of Victor’s eye!

Thanks to Adam and Victor’s tearful heart-to-heart, Y&R could be setting up that loyalty Victor craves. Before Adam left town, he mentioned that he wanted respect perhaps more than love. Victor may offer both in the coming months. He believes there’s still good in Adam and firmly thinks there’s a way to restore the family.

Unfortunately, letting Adam reclaim a spot in the Newman clan could end in disaster. Things could get particularly rough if Victor kicks Victoria off the throne and gives the chair to Adam. Of course, Victor could have a decent excuse. If another scandal erupts at Newman, Victoria could easily get the boot. She’s already been struggling to handle the one Victor brought on with his fake death scheme.

Billy Abbott (Jason Thompson) tried to run Adam down, which Victor will soon find out. He could take his anger out on Victoria and shove her aside, but there’s also a possibility this info will land in the wrong hands. Billy and Victoria aren’t married, but they might as well be. They made a big to-do about their re-commitment ceremony and are basically spouses without papers to prove it.

The media would have a field day over Billy’s arrest, particularly since Victoria’s already been arrested for two murders that never happened this year. There’s just too much drama swirling around Victoria right now. There’s been drama swirling around Adam as well, but his name hasn’t been tossed around in the news cycle as much.

Victor views Adam as the true heir to the throne anyway, so he’ll be looking for any reason to put him on it. The Young and the Restless spoilers say Victoria may have to start a war after all! There’s also the matter of Phyllis Summers (Michelle Stafford) and her alliance with Adam. She’ll keep trying to push him toward vengeance, so Adam could be left torn about what he really wants in the months ahead.

Naturally, Adam has to make his triumphant return to town first. Word has it Connor Newman (Judah Mackey) may be a huge part of that. We’ll give you updates as other Y&R details emerge. Stay tuned to the CBS soap and don’t forget to check CDL often for the latest Young and the Restless spoilers, updates and news.