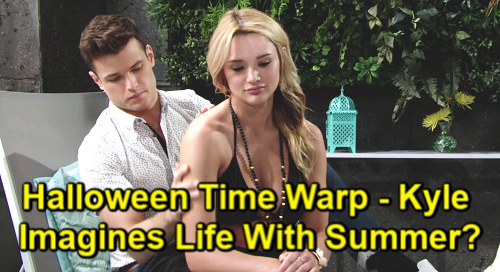 The Young and the Restless (Y&R) spoilers tease that some spooky shockers are looming in Genoa City. Y&R will be shaking things up for Halloween this year. It looks like they’ll do a fun alternate reality episode during the week of October 28-November 1. Several GC residents will have their lives turned upside down, so sweet dreams will become total nightmares.

For starters, let’s talk about Nick Newman (Joshua Morrow). He’s likely spent plenty of time wishing his brother never existed, so it seems he’ll get his wish. Nick will imagine a world without Adam Newman (Mark Grossman), which probably means an alternate reality where Adam was never born.

Of course, Nick may find that life without Adam isn’t as rosy as he expected. Christian Newman (Alex Wilson) can’t exist if his bio dad doesn’t exist, so there’s that! However, other big bombshells are brewing as well. After Nick awakens, he could have a new appreciation for Adam. Nick will learn that you should be careful what you wish for.

Phyllis Summers On A Power Trip In Her Alternate Reality

Phyllis Summers (Michelle Stafford) will land in a similar boat as a wish of her own gets granted. She’ll be on a power trip in her alternate reality, so maybe she’ll wind up stealing Newman Enterprises. Regardless, Phyllis will lose control of the situation and realize she’s in deep trouble. Great power comes with great responsibility, so having Phyllis crash and burn could teach her a valuable lesson.

Next, Abby Newman (Melissa Ordway) will become the center of attention – and she won’t like it one bit! Y&R might do some sort of Naked Heiress tie-in or something along those lines. Whatever the case, Abby will be in panic mode. She’ll find herself craving anything but the limelight once she wakes up.

Elsewhere, Kyle Abbott (Michael Mealor) will face a time warp. Since there’s been talk about planning a family with Lola Abbott (Sasha Calle), Kyle might dream about his future. He could imagine a pack of wild kids running around and wonder if that’s what he really wants. The Young and the Restless could even make Kyle look older and have him trying to parent unruly teenagers.

Does Kyle Abbott Imagine A Life With Summer Newman?

Then again, Kyle might step BACK in time instead. Could he imagine what life would be like if he’d stayed married to Summer Newman (Hunter King)? No matter how this plays out, Kyle will have a lot to think about once he rejoins the real world – the real soap world anyway!

Finally, Rey Rosales (Jordi Vilasuso) will get in touch with his inner bad boy. He’ll get assistance from Sharon Newman (Sharon Case), so it sounds like Rey could become a tad more Adam-like in his fantasy.