The Young and the Restless Spoilers: Is Mark Grossman Playing Adam Newman’s Imposter?

BY Sean O'Brien on May 16, 2019 | Comments: Leave Comments
Related : Soap Opera, Spoiler, Television, The Young and the Restless 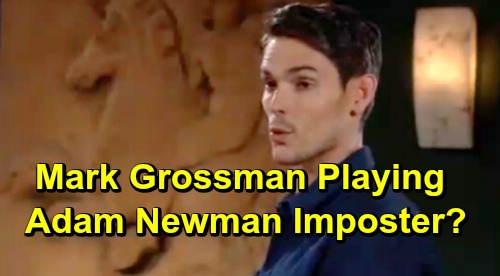 The Young and the Restless spoilers tease that Mark Grossman (Adam Newman) may not be playing this most infamous character. As Y&R fans took note of, there was no voice over announcing Grossman as now playing the role of Adam Newman during his debut, which has long been standard within this genre.

Of course, the above doesn’t prove anything. This isn’t evidence in one of the many court cases the Newman family has been involved in through the years. Of course, Adam was central to many of those legal issues in the early to mid part of this decade. But it is an intriguing soapy tidbit to chew on, with the ivory taste being surprisingly pleasant.

So, any chides to this theory should be passed along to Michael Baldwin (Christian Le Blanc). Better yet, contact Christine Williams (Lauralee Bell), who can make another attempt at a successful prosecution.

Not only did Y&R opt to go voice-overless, it also chose to not reference Adam’s latest face change. An entire lead-in storyline was created the last time he morphed from Michael Muhney to Justin Hartley.

The fall of 2014 arc revealed that Adam had lived after crashing in the fabled black SUV with Billy Abbott (as played by Billy Miller prior to the crash and then David Tom during the escape). Gabriel Bingham (Hartley in a dual role) is believed to have died while saving Adam from that crash. Sage Warner (Kelly Sullivan) then obtained medical treatment for Adam, which included radical facial reconstruction.

This time around, Grossman walked into a Las Vegas, Nevada, hotel room setting, and offered his first lines of dialogue to Sharon Case (Sharon Newman). No voice over and no elaborate explanation about why Adam looks vastly different than he did when last seen nearing five years ago.

Adam has also been reversed SORAS’d, meaning that he’s now younger. That does fit with the historical accuracy of the character, who was born about a decade after his brother, Nick Newman (Joshua Morrow).

Ignoring the facial issue and SORAS’ing the character aren’t really connected to the con that might be playing out. If Adam is seeking vengeance and actually doesn’t have memory loss, then it would be just like him to pay an impostor. Though in this instance, Grossman would also have to play the real man.

With whatever proves true, Y&R is taking a fresh approach with this recast. How it plays out will be determined by audience enthusiasm long-term, rather than simply during these first handful of weeks.