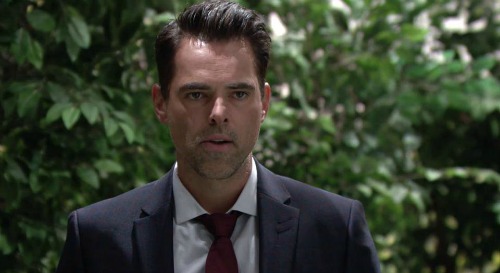 The Young and the Restless (Y&R) spoilers reveal that one CBS soap star is planning a big move. The LA Times reports that Jason Thompson (Billy Abbott) has put his home up for sale. The Y&R actor’s one-story house is described as “Midcentury Modern…with a hip retro vibe” and is priced at $1.275 million.

However, the real story here is what this could mean for Thompson’s career. It’s entirely possible that Thompson simply wants a different house and that’s that. Sometimes you’re just looking to make a change. Of course, that can go for somebody’s career as well! Is Thompson’s Y&R future really secure?

Let’s consider an interview Thompson did with Soap Opera Digest not too long ago. He talked about his decision to leave his previous role as Dr. Patrick Drake on General Hospital, which certainly wasn’t an easy call to make. Thompson valued the cast, crew and fans, but he ultimately opted to step outside his comfort zone.

“I felt like I needed to scare myself a little bit, make myself nervous by starting over again,” Thompson said. He added that once The Young and the Restless offered him a chance to do that, he had to take advantage of it. Thompson acknowledged that “it was just time to change it up.”

Could Thompson be eager to step outside his comfort zone once again and give himself another scare? Thompson admitted that he likes how his current schedule works for his family, but he could always hop to another soap or find another job that accomplishes the same thing. We should also note that he made a rather ominous comment about Billy as he wrapped up his interview.

“I might not be playing this character for the remainder of the show, but I always want to leave it in a better place than when I got here,” Thompson said. Thompson may have just been feeling reflective in that moment, but it was still an odd statement. It’s the kind of thing that makes you worry – especially when that actor has just put his Los Angeles home up for sale!

We’ve talked about the possibility of Thompson leaving, but there’s always a chance he could be let go. It happened to Daniel Goddard (Cane Ashby), so there’s a lot of uncertainty at The Young and the Restless right now. Naturally, we’re rooting for Thompson to stick around. He’s been a great recast throughout his time at Y&R, so let’s hope he stays right where he belongs.

What do you think about Jason Thompson’s portrayal of Billy? Do you hope he remains in the role? The Young and the Restless spoilers say Billy’s dark side will lead him down a dark path again, so stay tuned to see how it all pans out. We’ll give you updates as other Y&R news emerges. Stick with the CBS soap and don’t forget to check CDL often for the latest Young and the Restless spoilers, updates and news.