BY hellodrdavis on October 19, 2019 | Comments: one comment
Related : Soap Opera, Spoiler, Television, The Young and the Restless 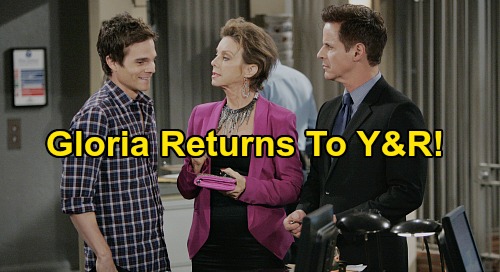 The Young and the Restless spoilers has some great news to pass on about a fan-favorite Y&R actress. Judith Chapman, who previously portrayed Gloria Fisher on the CBS soap, appears to be making a return to the show. The character of Gloria last appeared in October 2018 in her capacity as the CEO Assistant at Jabot, then was replaced by a new assistant, “Ted” (Sean Muramatsu).

It doesn’t seem that Jabot has had a CEO Assistant as of late, since Ted jumped ship and went to work for Ashley Abbott’s (Eileen Davidson) company, My Beauty. But that may be about to change, considering a big statement that Christian LeBlanc (who portrays Michael Baldwin) recently made about some of his acting partners on the show.

Christian LeBlanc was recently interviewed by Global TV, when he was asked the question, “Who do you enjoy working with most on Y&R?” Christian gave an answer that highly praised several of his acting colleagues. He said the following: “I’ve been on other sets and I’ve been on other shows and like any acting gig, it’s an ensemble. Even with Eric [Braeden] and Mel [Thomas Scott], when they jump into a group of people, it is an ensemble.”

Then he said: “My favorite is to be in one of these groupings with Michelle [Stafford] or Greg [Rikaart], and today I worked with Kevin, Chloe, and Gloria. It’s seamless and nobody is the star. It really is wonderful to be in a team like that because you really get to shine, and you know people have your back. It’s really wonderful.”

That’s music to many fans’ ears, who have been wondering for a while exactly where the character of Gloria has been. Since she left canvas back in 2018, her on-screen son Kevin Fisher (Greg Rikaart) has returned along with Chloe Mitchell (Elizabeth Hendrickson) and Bella Fisher (Martie Marie Blair), so it would make sense that Gloria would return at some point to interact with them.

Christian didn’t elaborate any further during his interview, so it’s unclear exactly when Judith’s first airdate will be, but given taping schedules, we should likely be seeing her in the next 6 weeks, give or take. Who knows what kind of mischief Gloria will get into this time around!

Are you looking forward to seeing Gloria back on canvas? Stay tuned to the CBS soap and don’t forget to check CDL often for the latest Young and the Restless spoilers, updates, and news.